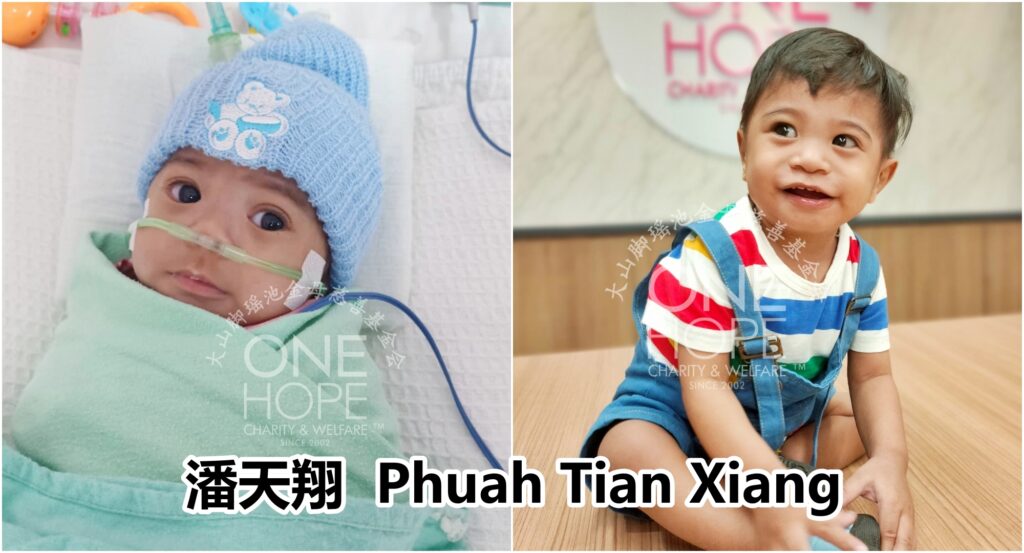 Phuah Tian Xiang, a little boy from Penang Island, is lively and adorable. His smiles always capture the hearts of the people. Although he looks cheerful, but he is actually “carrying” a time bomb. He breathes loudly, and has cyanotic lips as he suffers from Tetralogy of Fallot (TOF) – a congenital heart defect, as well as infantile laryngomalacia.

The doctor informed that the child needed a surgery before the age of one. Unexpectedly, due to negligence, the child has not yet had the surgery even he is now one-and-a-half-year-old. His single mother panicked and asked for help, hoping that the public can help them with the RM78,000 in surgical fee.

【The baby has undergone a supraglottoplasty surgery when he was four months old due to infantile laryngomalacia. However, there is still a murmur in the throat of the child when he breathes, and his body is cyanotic due to long-term hypoxia】

The mother of Tian Xiang suffered from bleeding due to placental peeling at 30 weeks of pregnancy, and she was forced to undergo an emergency caesarean section. The baby boy was born two months before the expected due date, and he weighed only 1.33kg at birth. He was diagnosed with Tetralogy of Fallot (TOF) after he was born, and he has cyanotic lips. In addition, he also suffers from laryngomalacia – a voice box abnormality that narrowed the throat affecting his blood oxygen.

At that time, the baby was hospitalised for half a year, and after being discharged from the hospital, he needed to use a continuous positive airway pressure (CPAP) machine to supply oxygen to breathe. When taking care of the child, the mother tried to avoid the child crying to reduce the risk of cyanosis. She is also worried that the child will suffer from sudden difficulty in breathing, so the mother is under great psychological pressure.

The doctor informed that the child needed a surgery before the age of one, and the surgery was supposed to be scheduled in February this year, but it was delayed due to human negligence.

The baby’s 37-year-old single mother Kok Chih Ching is not only under great pressure to take care of her sick son, she also needs to take care of her elderly mother, who is suffering from mobility problem. She relies on the income of RM2,000 a month from the sale of dry ice to support the family. She is unable to afford the huge medical expenses of her child, hence, she approached One Hope Charity for help.

After receiving the application, One Hope Charity arranged a home visit to review the case, and later agreed to assist in raising the RM78,000 in surgical and medical expenses. The family agreed to fully authorise One Hope Charity to take charge of the fundraising and collect the donations from the public on their behalf.