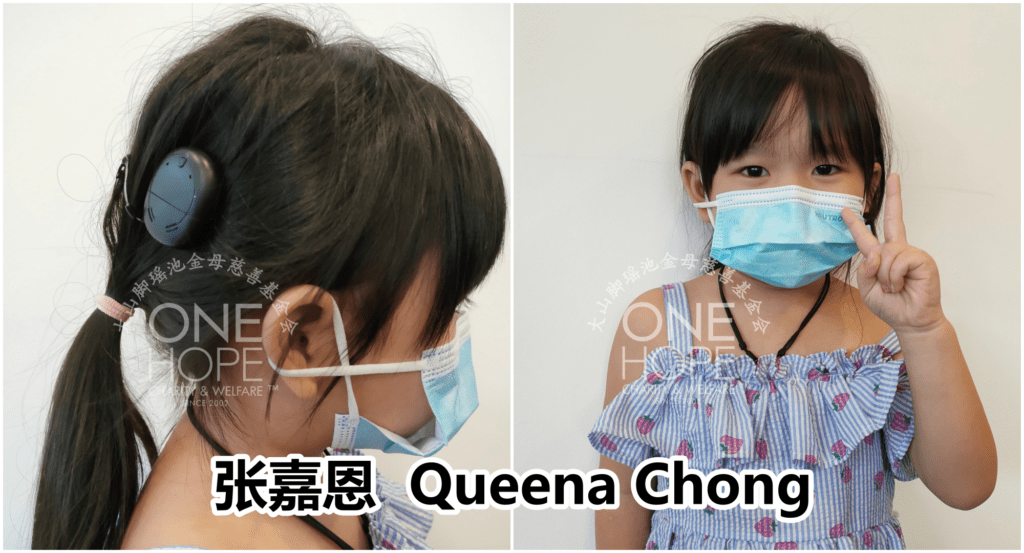 A five-year-old girl was born with binaural sensorineural hearing loss. Her single mother wanted to help her in regaining her hearing ability before she starts the primary school, but she is unable to afford the cochlear implant and surgical fees of RM82,400. She hopes that the public can lend a helping hand to give her daughter a chance to regain her hearing ability.

30-year-old Kong Wai San from Johor is a strong single mother who raises three children, aged 13, 11 and five on her own with a salary of about RM2,000. Five years ago, her youngest daughter Queena Chong was diagnosed with congenital cytomegalovirus (CMV). The baby girl was confirmed deaf in both ears two weeks after she was born. In order to help little Queena to regain her hearing, she had a cochlear implant in her left ear when she was one year old. Her family members raised the money by themselves and paid for the surgical fee and the cochlear implant which cost RM90,000 then.

And now, little Queena’s parents have divorced, and her mother, who takes care of her children alone can no longer afford the expenses of surgery and cochlear implant in her right ear, hence, she approached One Hope Charity for help in raising the funds.

【Her left ear was implanted with an artificial cochlea when she was one year old, and now, she can express herself through simple words and sentences】

This little girl can express herself through basic and simple words and sentences, but she is still facing learning difficulties due to her hearing impairment. Now, her right ear is suitable for artificial cochlea implantation, and the surgery will give her an opportunity to hear with the other ear, as well as to minimize the impact caused by her hearing impairment.

Little Queena underwent artificial cochlea implantation in her left ear when she was one year old. After that, her family sent her for regular speech therapy classes. When she was three years old, her mother sent her to the kindergarten, hoping that she could learn speaking and interaction like the other children of her same age. However, her teachers and family members found that her speaking ability had not made any progress after some time.

Fortunately when she was four, her family members found that her speaking ability showed improvement, and she could say some simple sentences, such as “I want to eat”, “My brother beats me” and other short words and sentences.

When little Queena went for her regular follow-up visit recently, her attending doctor agreed that the hearing ability for her left ear had progressed, and the doctor proposed that she can go for artificial cochlea implantation in her right ear. However, the cochlear implant cost RM70,400, while the surgical and hospitalisation fees are amounted to RM12,000, which sum up to RM82,400.

Her mother, Wai San is a salesperson in a food company with a basic salary of nearly RM2,000. After divorce, she needs to raise her two sons and a daughter by herself. Usually when she’s out for work, her two sons will take care of themselves, while little Queena will be sent to the kindergarten.

【Medical Trivia: What is Cytomegalovirus (CMV)】

If a person’s immune system is normal, the Cytomegalovirus (CMV) infection is usually asymptomatic. Some otherwise healthy people with CMV infection develop a mononucleosis-like syndrome, such as fever, enlarged lymph nodes and others.

For patients with weak immune systems, they might experience serious problems and symptoms like fever, bone marrow suppression and tissue invasive diseases such as pneumonia, inflammation of liver, colitis, nephritis and retinitis.

For babies that infected by CMV might experience symptoms like severe neurological abnormalities, hearing and development delay.