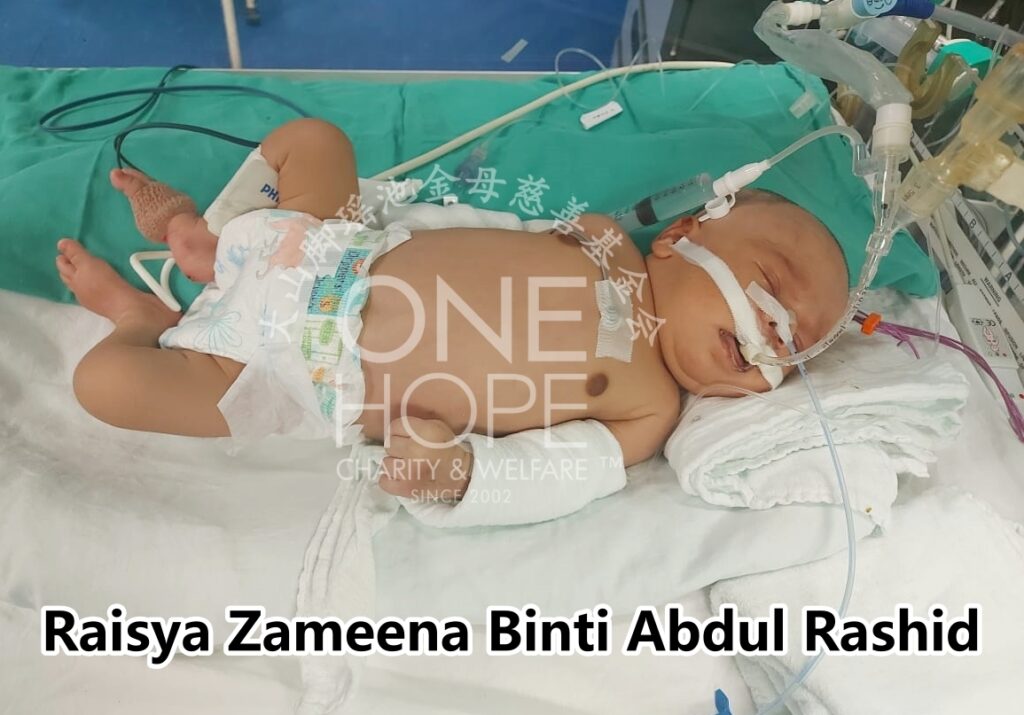 The baby girl was not diagnosed with congenital heart disease right after she was born. Although she was admitted to the hospital twice for jaundice, but as she did not show any symptoms, the doctor failed to detect her heart problem in time. It was until when she is 18 days old, she suddenly showed symptoms of heart disease.

After being diagnosed with serious heart disease, the baby girl has been relying on assistive devices in the intensive care unit to survive. The doctor confirmed that she must undergo a surgery before six weeks old to avoid her from danger. Her parents can only afford RM50,000, and they hope that the public can help them with the shortfall of RM60,000.

Raisya Zameena Binti Abdul Rashid is a baby girl from Baling in Kedah. Her mother went for regular check-ups during pregnancy but the baby was not detected with any illness and diseases then.

The baby girl was born full-term on November 4, and she was not diagnosed with any diseases during the tests when she was born. Her parents also welcomed their first born happily.

When the baby was four days old, she developed jaundice. Her parents sent her to the hospital immediately. After three days of hospitalisation, she was allowed to be discharged. At that time, she was not detected with any heart problems.

She had jaundice again when she was 10 days old. This time, the parents sent her to a specialist hospital, and the doctor suspected that she had a heart problem. She underwent a scan, but at that time, besides noticing that her heart was smaller, the doctor did not find any other heart issues.

【Symptoms appeared when she was 18 days old and it terrified her parents. They rushed her to the hospital and the girl was diagnosed with severe heart disease】

Until she was 18 days old, the baby girl showed symptoms of heart disease, such as bluish lips, shortness of breath and others. As a medical staff working in the emergency unit, her father knew that there was something amiss and he rushed her to the hospital immediately.

The doctor who performed the examination revealed that the condition of the baby girl was serious. She was diagnosed with transposition of the great arteries and interruption of the aortic arch. She must undergo a surgery before six weeks old, otherwise, her life might be in danger at any time.

This is a complicated surgery which cost RM110,000. Her parents can only afford RM50,000, hence, they approached One Hope Charity for help to raise the remaining RM60,000.

Her 31-year-old father Abdul Rashid Bin Abd Latif is a medical officer earning about RM7,000 a month. Her 28-year-old mother Zuraikha Azrin Binti Azmi is a housewife. The baby girl is their first child.

After reviewing the case, One Hope Charity decided to help the baby girl to raise the remaining RM60,000 surgical fee. Her family agreed to authorise One Hope Charity to take charge of the fundraising and collect donations from the well-wishers on their behalf.