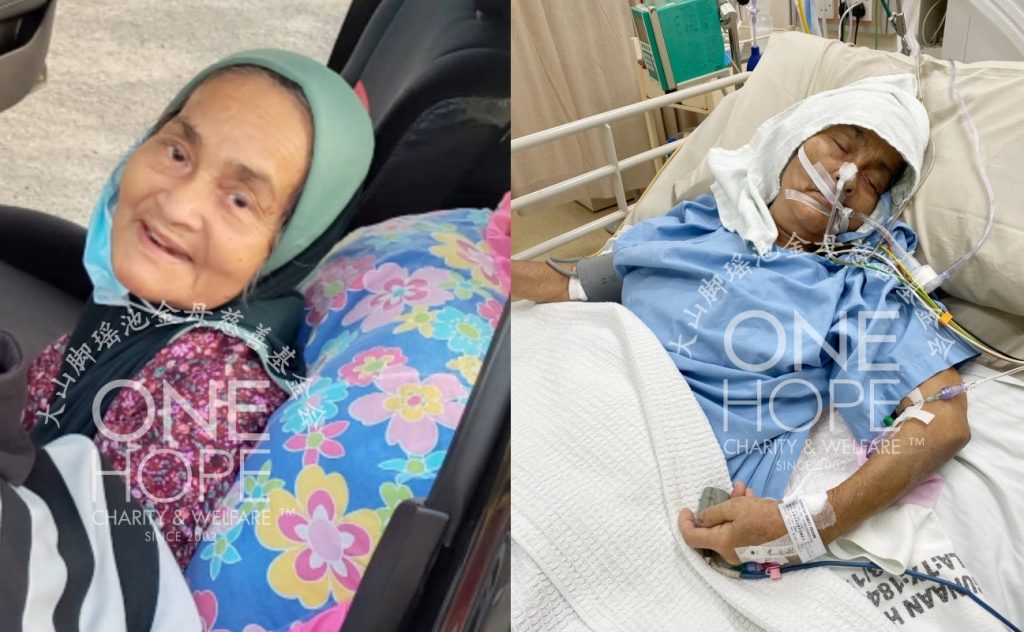 A mother in her seventies was discharged from the hospital after undergoing heart bypass surgery, but she became unconscious the next day. After sending to the hospital, it is confirmed that she suffered from a stroke. She urgently needs RM60,000 to undergo mechanical thrombectomy, otherwise her body may be paralysed or facing danger in life.

Rakiah Binti Husin, 74, who lives in Kuala Ketil, Kedah, suffered from high blood pressure. Three years ago, her heart was clogged and was waiting for her scheduled operation, but recently, she suffered from a heart attack. Her children brought her to a specialist hospital for the surgery. The children had to go near and far in order to raise enough money to settle the medical expenses.

The elderly underwent heart bypass surgery on April 5, and was later discharged on April 8. Unexpectedly, around 5am on April 9, she fell unconscious and their children had to rush her to the hospital.

She was taken to a specialist hospital, in hopes that after receiving the medical examination report she would be transferred to the government hospital for treatment.

After examination, it was confirmed that there were clottings on her brain, and it is in need to undergo mechanical thrombectomy in the shortest time possible. Thus far, there is only one specialist hospital in the Northern region that provides such operation. With no other choice, the children sent the mother to the said hospital, while also approaching One Hope Charity for help.

The last time when their mother had the heart surgery, the patient’s children had already used up their savings for her treatment. So they hoped that the public could help donate to save their mother. One Hope Charity has reviewed their case, as well as allowing their mother to resolve her blood clotting issue, the surgery has been proceeded. Currently the patient is now in ICU for further examination.

Rakiah has an 82-year-old husband and bears nine children. Her children are aged between 33 and 58, and all are ordinary workers and formed their own family. Ever since their mother underwent her heart bypass surgery, all nine siblings have spent their savings for her expenses. Today they need an additional RM60,000 for the mechanical thrombectomy.

It all depends on Rakiah‘s life-and-death situation as not only it could save her life, but would not have to be fully paralysed. We urged the public to save the life of the mother of nine.