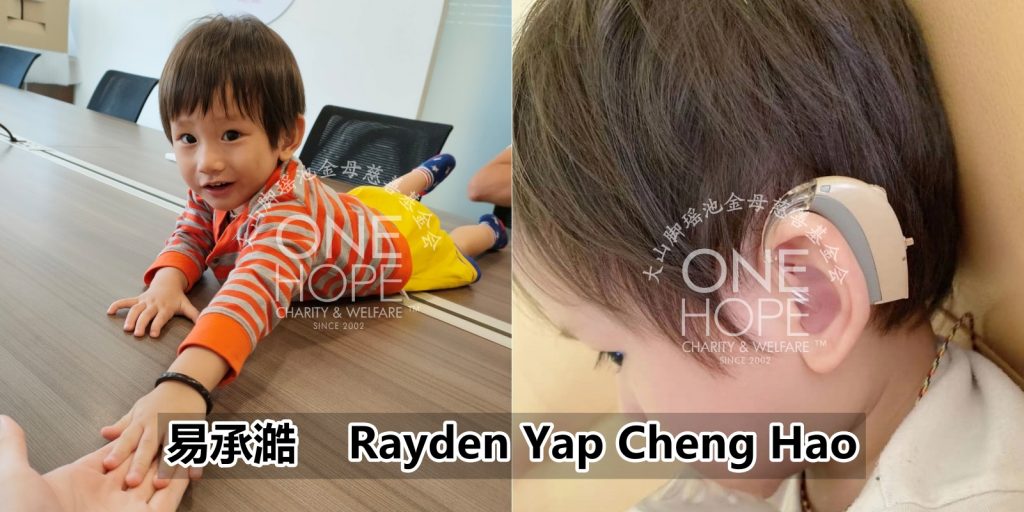 The young adorable boy brought joy to the family every time he moved around, but what they hoped to hear was their son to call them “mommy” and “daddy”.

At the age of two, where normally a baby would learn to speak. However, that was not the case for Rayden Yap Cheng Hao, as much muttering he could have done, he was not able to speak out simple words. After a medical checkup, it was discovered that Rayden was infected with CMV, which completely loses his hearing abilities.

Rayden was born without any symptoms. According to the doctors, CMV infection could have long term effects in children, mainly towards sensorineural hearing loss. However, after various tests, the doctor has identified a suitable artificial cochlea to recover his hearing ability. The artificial cochlea for both ears cost a total of RM144,600. A benevolent has already sponsored RM75,000, whereas the remaining RM69,600, as well as the additional hospital admittance and surgery fee of RM23,000, can be settled with the help of public donation.

Rayden was born in Negeri Sembilan, and when he was nine months old, the parents suspected that he had no response towards any sounds. They had brought their concerns to the doctor, but initial checkup found that he was a completely normal child.

By January this year, little Rayden is now 18 months old. Yet he was not able to call out his parents. Both parents have even made loud noises right next to their ears, but their son seems to have no response to that. Concerning the issue, they brought him to Melaka for a hearing test and confirmed that little Rayden has lost his hearing. Thus, he was transferred to National University Hospital for further examination.

In February, a hearing specialist performed CT scan and MRI for little Rayden, which found that his cochlea is perfectly developed. What caused his complete hearing loss was that he had a CMV infection, and one of the sequelae of the infection is hearing loss.

In order to bring little Rayden back to the world of sound and music, both of his ears must be implanted with artificial cochleas. If this were to be left untreated, his speech ability would also be severely affected.

However, the value of an electronic cochlea is very high. The cost of the cochlea on both sides costs RM144,600, with an additional cost of RM23,000 for hospital admittance and surgery fee, tallying up a total of RM167,600. Luckily, a generous donor has sponsored for one side of the artificial cochlea, valued at RM75,000, while the parents hoped that One Hope Charity could help with the remaining fee of RM92,600.

Rayden’s father Yap Joon Seong, 34, is a salesperson with a basic salary and commissions of approximately RM3,000, whereas the mother Theng Yue Qin, 27, is a housewife. Besides Rayden, the family also takes care of three more children, aged 7, 6, and 4. Rayden is the youngest among the four.

After reviewing the case, the Association has decided to launch a fundraiser to raise RM92,600 in hoped that little Rayden can be brought back to the world of sound as soon as possible.