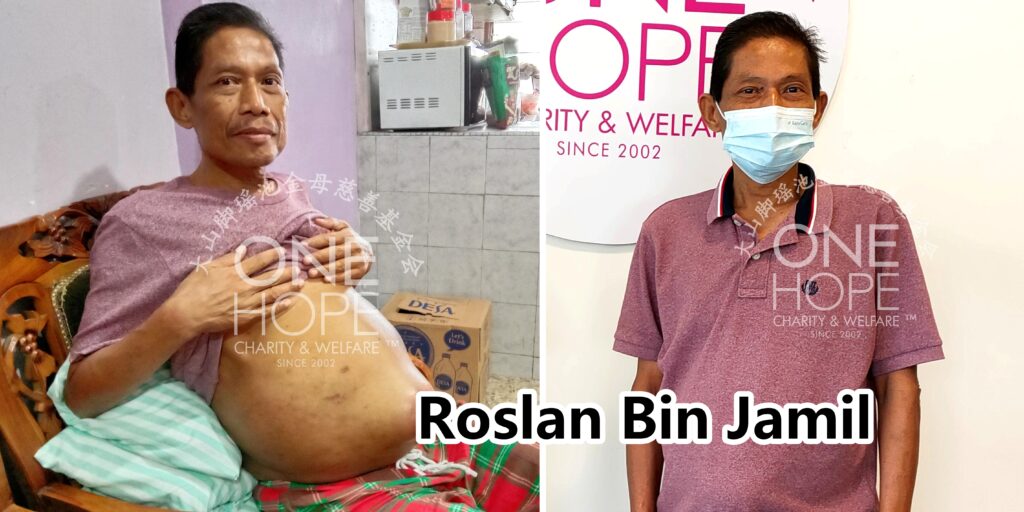 Due to cirrhosis of the liver and ascites, the 56-year-old man has a big belly that looks like he was pregnant for 7 months. The water fills in his stomach and he require to drains 18 liters of water every month in Hospital. He needs a liver replacement to survive. Now the niece is willing to donate her liver to save the uncle. However, the liver transplant surgery needs RM130,000 and the family wishes the public to help them.

Roslan Bin Jamil (56, single) from Selangor was diagnosed with liver failure last year. In October 2021, doctors recommended that he have a liver transplant, and if he fails to do so, his life expectancy is estimated to be less than 12 months. He also informed his brothers and sisters to find suitable donors.

Roslan's brothers and sisters are older, fortunately he has a group of kind nephews and nieces who are willing to donate livers. After a series of tests, the 35-year-old niece who living in Johor is suitable for the liver transplantation. The married niece has also obtained her husband's support to donate liver to her uncle.

The niece is willing to donate the liver for the uncle, but the cost of liver transplantation requires RM130,000. The huge medical expenses cannot be borne by the family. Therefore, they hope the public could help them in order Roslan can perform the transplant surgery within the golden period.

【The liver has failed, so it can't function properly, and the stomach presents like a 7-month of pregnancy】

Roslan was seen at a government clinic in June 2019 for coughing up blood and was subsequently referred to the hospital for testing. After that he was diagnosed as a hepatitis C patient with diabetes, the condition was not serious, just taking medication and regular follow-up visits is enough.

In May 2021, Roslan returned to the clinic as usual and was scheduled for an ultrasound scan, which reported signs of oedema in his lymph around his tummy. Then he was referred to University of Malaya Medical Centre, and then in August, Roslan's stomach began to swell, and then his feet were swollen and causing him to walk difficultly. After a detailed diagnosis by the doctor, it was found that his liver had failed, so it could not function properly, and his stomach presents like a pregnant woman who had been pregnant for 7 months.

【If don't have liver replacement surgery, one can only live for 12 months; and it is difficult to have a suitable liver, but I was worried about the surgery cost】

In October 2021, doctors recommended that the patient have a liver transplant, if he does not change his liver, his life expectancy is estimated to be less than 12 months, the operation has a certain risk, but he is willing to give it a try, this is an only way to save his life.

His family was also very positive, and all had done liver matching tests. Fortunately, after a series of tests, the daughter of the third brother was identified as a suitable transplantation candidate, and she was willing to donate her liver and received support from her husband.

Roslan, 56 years old, worked as a factory operator, toll booth cashier, and pizzeria customer service, all of whom were self-sufficient. At the end of March 2021, he was suspended due to many discomforts caused by the illness.

He also received all the provident fund to pay medical expenses and daily expenses last year, although his siblings occasionally subsidize some money, now they need to carry out liver transplants, and the RM130,000 surgery fee is unaffordable by the family, so they seek the assistance of One Hope Charity and hope to get donations from the public.

After receiving the application, One Hope Charity arranged a home visit review and decided to assist Roslan in raising the required medical expenses, and the family agreed to entrust the fundraising activities to ONE HOPE CHARITY and collect the funds on their behalf.