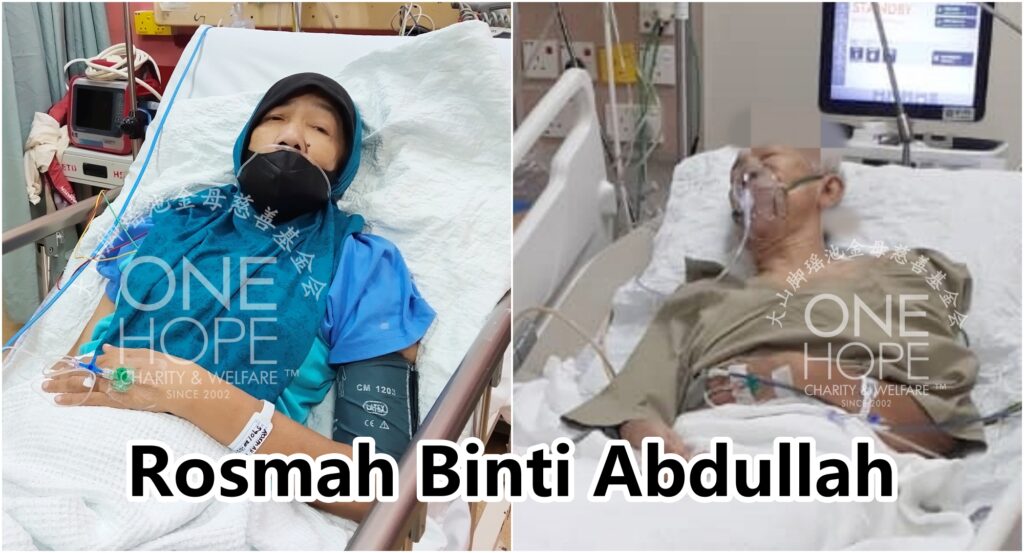 She spent her life taking care for her disabled youngest daughter. Even when her husband passed away in an accident 12 years ago, she faced the lost with great courage. Now that her children have grown up, just as she was about to enjoy her life with her children and grandchildren, the 63-year-old mother collapsed after suffering a stroke. She needed an urgent surgery to save her life, but her children are worried as they are unable to bear the huge surgical fee.

63-year-old Rosmah Bt Abdullah from Butterworth, Penang, was found to have a 50% cardiovascular blockage four months ago after she experienced breathing difficulties. She later took medicine to control her condition. Earlier, she also suffered from loss of appetite due to diabetes and high blood pressure, and she also admitted to the hospital twice due to pulmonary edema and cecum disorder. Her third child even quit her job to take care of her mother at home.

On 3 June around 6am in the morning, Rosmah was at home. Her daughter discovered that her mother’s mouth was crooked, unable to speak and move, and she looked at the daughter helplessly seeking for help.

Seeing this, the daughter quickly called her siblings for help, and they rushed the mother to the hospital in a private car. Examination revealed that she had a stroke and needed a mechanical thrombectomy within the golden window. However, there is only one specialist hospital in the entire Northern region that can perform the surgery, and the surgical fee is as high as RM50,000, which made her children worried.

The children are devastated and panicked. The helpless children finally approached One Hope Charity for help. After urgent review and approval, the patient was quickly transferred to the specialist hospital for surgery.

Her husband was an officer at the Customs Department but he passed away 12 years ago in an accident, leaving behind the wife and four children. The wife lived on a pension of RM400 a month and the disabled daughter’s RM300 aid from the Welfare Department. Fortunately, her other children have grown up and started to work, which finally relieved the financial burden from her shoulder.

She originally had six children, two of which have passed away. Her 37-year-old eldest son is a warehouse supervisor in a hotel, earning about RM2,000 a month. He is married with three children. Her 34-year-old daughter, who is her third child is single. She worked as a factory operator but quit her job to take care of her sick mother and disabled sister; Her 32-year-old son, who is unmarried, is a factory operator, with a monthly salary of RM1,220; and the 24-year-old youngest daughter is a disabled person with learning disability.

Except for the eldest son who has his own family, the other three children live with their mother in a rented kampung house in Butterworth. The whole family currently relies on the meagre income of the fourth son who works as a factory operator, and the RM700 financial aids to live. They can only barely survive and they have no extra savings, so they are unable to afford the huge medical expenses of their mother.

After an emergency review of the case, One Hope Charity decided to help Rosmah in raising the RM55,000 in medical expenses, including RM50,000 for her surgery and RM5,000 for the formula milk powder and diapers that she needs after the surgery.

Her family agreed to fully authorise One Hope Charity to take charge of the fundraising and collect the donations from the well-wishers on their behalf.