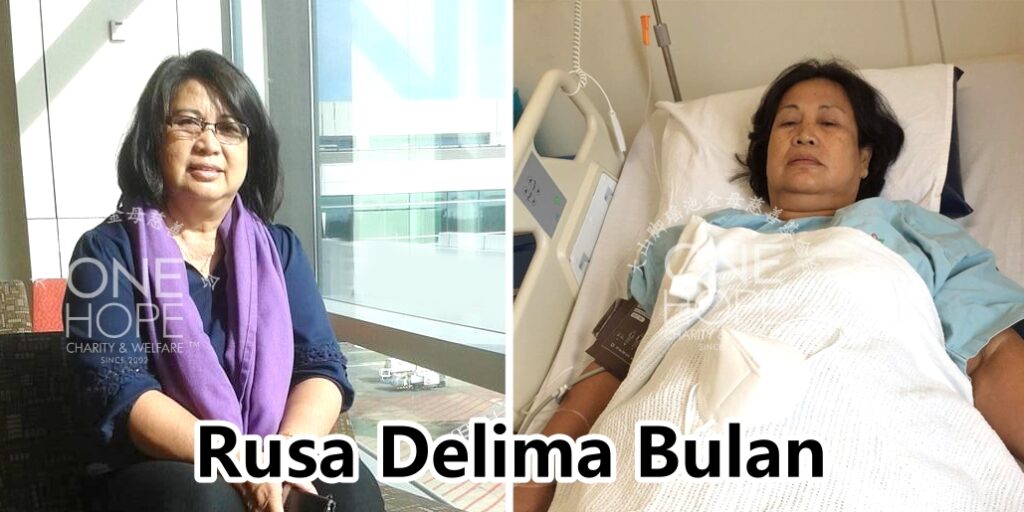 A mother thought that she would be able to enjoy her life after her children grew up but the news of her being diagnosed with breast cancer made her depressed. With the encouragement and companionship of her family, she decided to fight the cancer bravely. However, she is still short of RM37,100 chemotherapy fee and she is hoping that the public could help her.

63-year-old Rusa Delima Bulan is an indigenous from Miri, Sarawak. In early this year, she suddenly felt a lump in her breast and went for treatment in a clinic. The doctor then told her that it was fat in her breast and it was not a major problem.

However, she was worried. She went to a hospital for a mammogram in June, and the doctor confirmed that she has stage 2 breast cancer, and the cancer has spread to her armpit. She was depressed and could not accept the suddenly news.

Under the arrangement of the doctor, she went to Kuching Hospital to undergo mastectomy on July 16. The surgical fee then was about RM10,000. At that time, the surgical fee was raised by her children from their friends and relatives. After the surgery, the doctor recommended her to stay in Kuching so that she could continue with her chemotherapy and radiotherapy after the wound healed.

As Miri does not have cancer specialist, she has to travel from Miri to Kuching whenever she needs a surgery or chemotherapy. Miri and Kuching are quite far apart – the journey between the two cities would take almost 13 hours. The long distance travelling is not feasible as she is weak.

In addition, Rusa Delima Bulan has no relatives in Kuching. If she stays in Kuching for a long period, no one would be able to take care of her, and her accommodation is also a problem for her. After discussing with the family, they decided to send her mother to Penang for treatment, as her second daughter is currently working in Penang. With this arrangement, her second daughter could also take up the role to take care of her mother.

What they did not expect was that the doctor in Penang Hospital was unable to arrange her for further treatment due to the high Covid-19 cases there. After reviewing her medical report, the doctor referred her to the Mount Mariam Hospital for her cancer treatment.

The doctor told Rusa Delima Bulan that she needs to undergo six courses of chemotherapy amounting to RM41,500. The family had already paid RM4,400 but they could not afford the remaining RM37,100. Therefore, they approached One Hope Charity for help.

In fact, Rusa Delima Bulan was shocked to know that she has breast cancer because none of her family members had cancer. She is also a person who takes healthy diet. When she knew that she was diagnosed with breast cancer, she could not accept it at the beginning. She even had the idea of giving up treatment.

Fortunately, with the encouragement from her children, she started to accept the facts and decided to undergo treatment. She hopes that she could continue her life and watch her grandchildren grow up and enjoy every moment of life with them.

Rusa Delima Bulan’s husband is a retiree. Their 39-year-old eldest son is a runner for a hospital, earning about RM500 a month; their 36-year-old second daughter is a civil servant, with a monthly salary of RM1,800; 32-year-old third daughter is currently unemployed; their fourth son doing online business with no fix income; while their youngest son is still a university student. They could not afford the chemotherapy expenses needed by their mother and hoping to receive help from One Hope Charity.

After reviewing the case, One Hope Charity decided to assist her. The family agreed to authorise One Hope Charity to take charge of the fundraising and collect donations from the well-wishers on their behalf.

The family agrees to allow One Hope Charity to take charge of the fundraising and at the same time, accumulating the donations from the public. For enquiries, please contact our careline at 016-4192192 or 019-2322192.