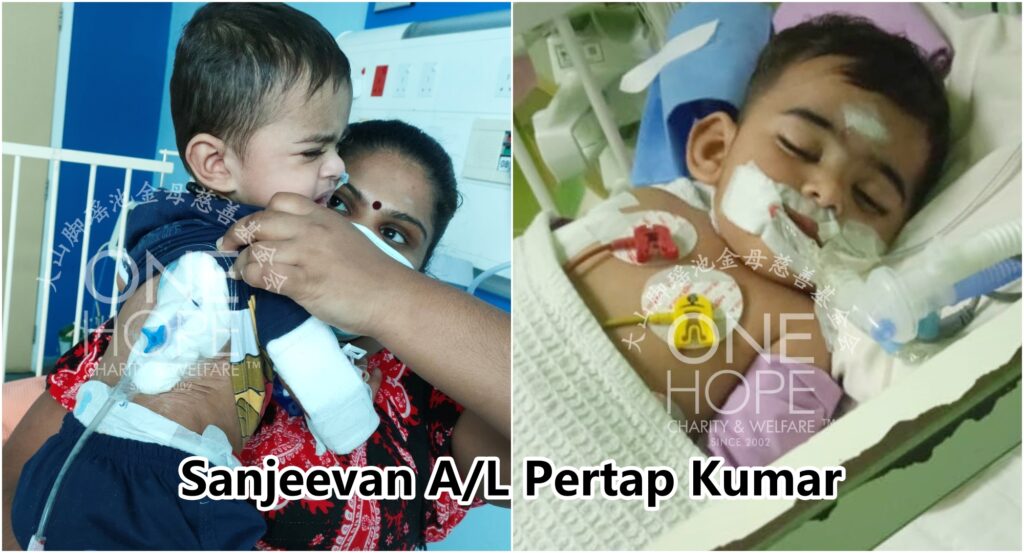 *A total of RM10,000 from the “emergency medical reserve fund” has been channelled; hence, One Hope Charity will only launch fundraising of RM50,000 for this case.*

One-year-old boy Sanjeevan A/L Pertap Kumar was healthy and lively. Unexpectedly, he had a lung infection after a fever, cold and cough and once fell into a coma. He suffered and struggled to survive in the intensive care unit. After three months of hospitalisation, the doctor confirmed the boy needed surgery to remove half of his right lung. The boy also needed a breathing aid for two years after the surgery. The parents were worried about the substantial medical expenses.

Sanjeevan from Kuala Lumpur needed observation after the surgery to remove half of his right lung, and the hospital estimated the medical expenses would be RM60,000. His parents pleaded with the public to help their son.

【The mother stayed in the hospital for more than two months with the son. The mother was distraught seeing her son’s tiny little body struggling on the hospital bed. She was stressed and almost collapsed. Her biggest hope is to see her son get rid of the severe illness and grow up safely and healthily】

Little Sanjeevan had a sudden fever, cough and cold on 13 August this year. The doctor in the clinic discovered he had shortness of breath and murmurs in the lungs, so the doctor gave him oxygen to ease his condition.

However, little Sanjeevan suffered breathing difficulty three days later, so the doctor referred him to the hospital for an examination. The blood test result showed that the boy had fluid in his lungs and high bacterial counts in the lungs. The doctor put him on a breathing aid and antibiotics treatment in the intensive care unit for two weeks.

The doctor confirmed that the boy had necrotising bronchopneumonia, staphylococcus aureus necrotising pneumonia complicated with right-side empyema and bronchopleural fistula.

Due to pulmonary oedema, the doctor implanted a chest tube to drain the fluid and pus from the boy’s lungs and put him in the hospital for three months, and his parents borrowed money from various individuals to pay his medical bills of RM11,000.

The doctor informed the parents that the boy had a hole in the right lung, which was supposed to close on its own, but the bacterial infection had caused the hole to expand, and there was no medication to cure him. Therefore, he needed surgery to remove half of his right lung to avoid further infection. The doctor further explained that they failed to discover the hole earlier due to the many white spots that covered the black hole.

The boy’s 30-year-old father, Pertapkumar A/L Ganesan, is a lorry driver with a salary of about RM2,500 a month. His 28-year-old mother, Shalini A/P Veeran, was a factory operator and quit her job and became a housewife after she was pregnant. Little Sanjeevan is the firstborn of the couple.

It seemed like a normal fever, cough and cold, but it had taken away little Sanjeevan’s health – he lost half of his right lung and needed another month to be in the hospital. He also required a breathing aid for the next two years! Although his father’s salary is enough to cover the family’s living expenses, he cannot afford the medical expenditures; hence, he approached One Hope Charity for help.

After reviewing the case following a home visit, One Hope Charity decided to assist in raising the medical expenses little Sanjeevan needed. His family agreed to fully authorise One Hope Charity to take charge of the fundraising and collect donations from the well-wishers on their behalf.