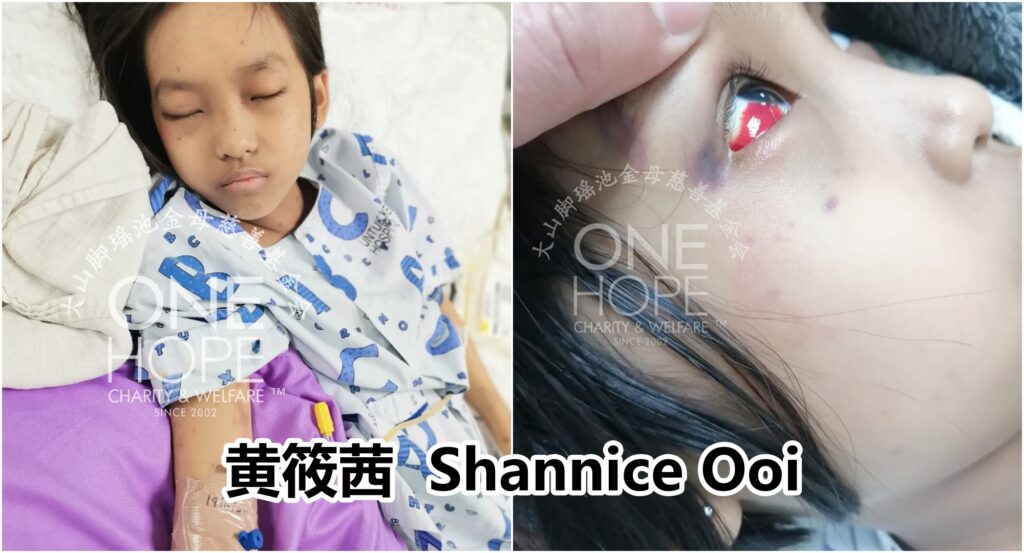 She was very much looking forward to the day she returned to school, but she was forced to stop schooling due to a rare genetic disease - the Fanconi Anaemia (FA). She needs a bone marrow transplant to continue survive and the father’s bone marrow has been identified suitable for her, so the father-and-daughter urgently plead the public to help them with the shortfall of RM88,000 for the bone marrow transplant and medical expenses.

10-year-old Shannice Ooi from Alor Setar, Kedah, has always been small and thin, and seems to be malnourished but she has no serious problems. She went to school as usual like other children and had a happy childhood time. Unexpectedly, she developed a persistent fever after she took the Covid-19 vaccination at the early of the year. Examination showed that the blood platelets were low, and she was diagnosed with Fanconi Anaemia (FA), which is an inherited bone marrow failure syndrome.

The girl suffered from severe cerebral haemorrhage and subconjunctival haemorrhage and needed weekly platelet transfusions to avoid internal bleeding. The doctor suggested her to undergo bone marrow transplant. Her 39-year-old father Ooi Kok Chuan is willing to donate bone marrow, but the family is worried about the huge medical expenses.

【Only a light collision with her sister, Shannice started to vomit and had epilepsy. She was sent to the hospital and was told that she had brain and eye haemorrhage and bruises all over her body】

Shannice has been normal since birth, but when she was six years old, her body weight was too light compared to other children of her age. She was less than 20kg and she looked small and thin, which made people feel that she was malnourished. However, she did not have any big health problems.

On 16 February this year, she took Covid-19 vaccination together with her mother, and both of them had a fever. After her mother’s fever subsided, Shannice was still having a fever. When she was admitted to the hospital for examination, the doctor ruled out the possibility of Covid-19 and dengue fever, but discovered that her blood platelet count was low, and suspected an anaemia. Her condition improved after platelet transfusion.

The Alor Setar Hospital referred Shannice to Penang Hospital for genetic test, and she was diagnosed with Fanconi Anaemia in May this year.

Fanconi Anaemia is a rare autosomal recessive hematologic disorder, which is an inherited bone marrow failure syndrome with symptoms such as pancytopenia, susceptibility to malignancy, and physical abnormalities including short stature, microcephaly, developmental delay, skin café au lait spots, and malformations belonging to the VACTERL-H combination. FA is generally diagnosed in childhood, but delays in diagnosis and variable disease manifestations are common, and some patients may not be diagnosed with FA until adulthood.

Fortunately, Shannice has no other deformities and grew up normally. It was until this year when she was confirmed to have low platelet counts and a genetic disease.

In June this year, Shannice and her sister accidentally bumped into each other on the face. She then developed epilepsy and vomited. Her parents rushed her to the hospital, and a test at the emergency department revealed that Shannice had cerebral haemorrhage and subconjunctival haemorrhage due to low blood platelet. There were also bruises around her body. She stayed in the intensive care unit for eight days and relied on medicine to clear the blood clot.

At present, Shannice needs to go to Alor Setar Hospital for platelet transfusion every week, and she needs to receive treatment at Penang Hospital once a month. The doctor informed that Shannice’s body was producing antibodies, so the doctor worried that the platelet transfusion would not be effective in the future, so she needed a bone marrow transplant.

His 39-year-old father Ooi Kok Chuan is a mineral water salesman, with a basic salary of RM4,174. Her 43-year-old mother Ng Poh Gaik is a hairdresser, earning a few hundred ringgits a month. The couple have a seven-year-old daughter and a five-year-old son.

The father admitted that he would not want to use public funds if he has the ability. However, his daughter’s condition made him worried as he has to concern about the child’s condition and at the same time, he is under huge financial pressure. As the child needs to receive treatments for six to eight weeks, there are too much of uncertainties. Currently, he can only afford the expenses during the treatment period and he is unable to afford the huge sum of surgical fee, hence, he approached One Hope Charity for help.

After reviewing the case, One Hope Charity agreed to assist in raising the RM88,000 in medical expenses. The family agreed to fully authorise One Hope Charity to take charge of the fundraising and collect the donations from the well-wishers on their behalf.