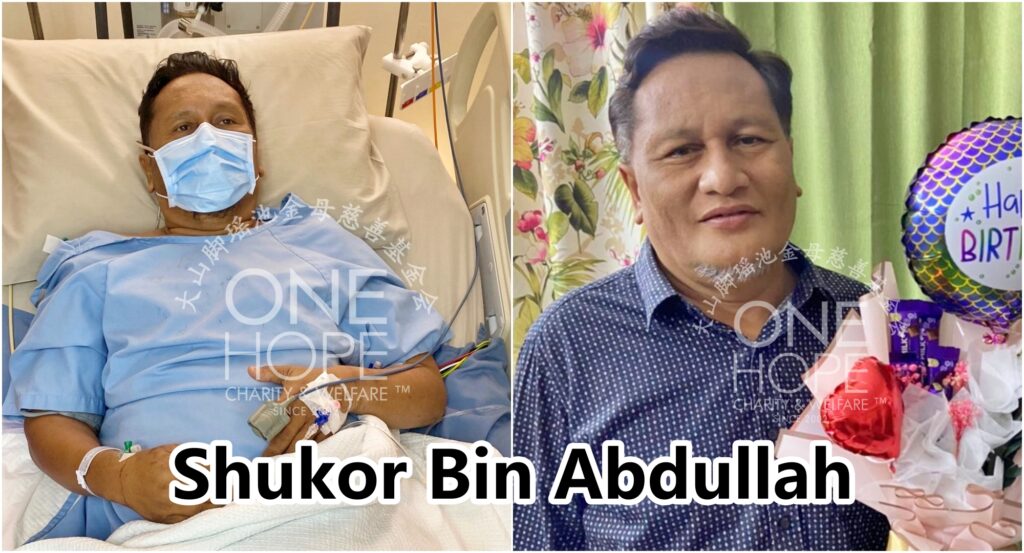 ***A total of RM13,500 from the “emergency medical reserve fund” has been channelled, hence, One Hope Charity will only launch a fundraising of RM31,500 for this case.***

A 53-year-old man from Selangor took his wife and children back to his hometown in Juru, Penang to visit his elderly mother during holiday. Unexpectedly, he suddenly had difficulty in breathing in his hometown. He was sent to the hospital and examination revealed that he had cardiovascular blockage. During the hospitalisation, he suffered a stroke. His family pleads the public to help them with the shortfall in medical expenses, so that the father can receive medical treatment as soon as possible to save his life.

Shukor Bin Abdullah, a 53-year-old man living in Kajang, Selangor, practices a healthy lifestyle. During the recent school holiday, he brought his wife and children to Juru, Bukit Mertajam to visit his elderly mother. Unexpectedly, he had sudden breathing difficulty on 9 September, and was sent to the hospital for examination. Result revealed that he has a heart blockage of 35%. His daughter also stayed back in the hospital to take care of him.

At about 6:00am on 13 September, the daughter discovered that her father could not speak clearly and could not move his left hand and foot. She quickly called the doctor, and examination showed that the father had a stroke and needed to undergo a surgery within the golden window. However, the children could only afford RM5,000 in medical expenses.

【The couple still have two children who are schooling and they need to pay for their expenses. The wife and children are at a loss as the head of their family suddenly suffered a stroke and collapsed】

He returned to Juru to visit his mother on 7 September. Two days later, he experienced breathing difficulty and was sent to the hospital. Unexpectedly, he suffered a stroke during hospitalisation. So he was referred to a specialist hospital for mechanical thrombectomy.

His wife and children are worried. They approached One Hope Charity to seek for assistance. After a quick review of the case, One Hope Charity decided to assist him in raising the shortfall in medical expenses.

Shukor and his wife are student bus drivers. They have five children. Their 27-year-old eldest son is a workplace safety officer, earning RM3,000 a month. Their 26-year-old daughter and 22-year-old daughter are housewives. Their 19-year-old son is currently studying in the university, and their nine-year-old youngest son is still in primary school.

Due to the Covid-19 lockdown earlier, all schools had conducted their classes online. So the couple could not work and had no income. They relied on their savings to pay for their expenses, and they even received food assistance from the food bank. And now, the huge medical expenses worried the wife and children.

After a quick review of the case, One Hope Charity decided to assist in raising the remaining RM45,000 in medical expenses (of which RM13,500 was channelled from the “emergency medical reserve fund”, and the remaining RM31,500 will be raised). The family agreed to fully authorise One Hope Charity to take charge of the fundraising and collect the donations from the well-wishers on their behalf.