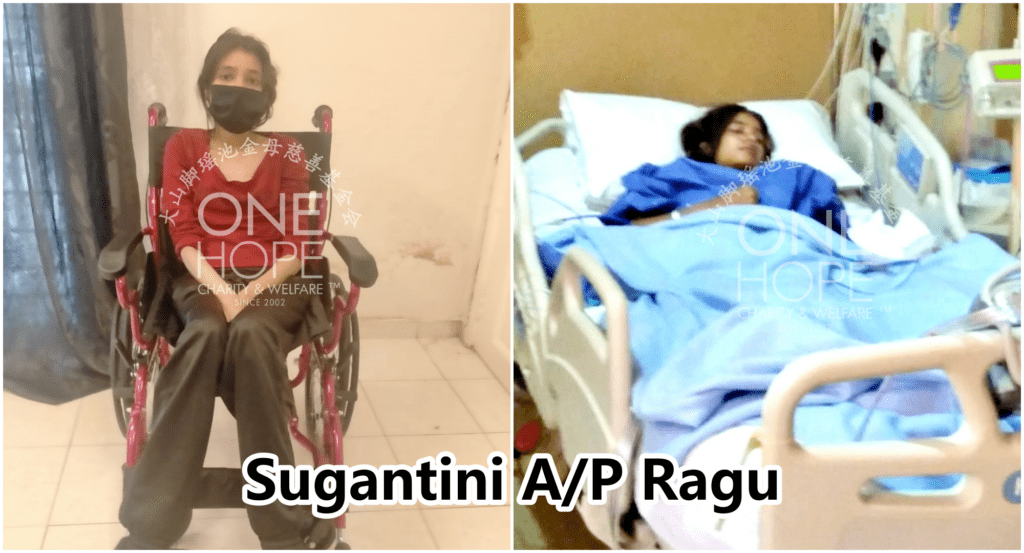 Although she is 28 years old but she weighs no more than 26kg. Not only she suffers from abdominal pain, diarrhoea and vomiting but also loss of appetite, unable to swallow, and her body can’t absorb nutrients from the food that she eats, causing her to be skinny . The 12 years of illness made her life miserable. But now, the doctor found an effective medicine, and she urgently needs RM30,000 for the medication supply for one year.

Sugantini A/P Ragu from Klang in Selangor was diagnosed with Crohn’s Disease in 2008, when she was just 16 years old. It is an inflammatory bowel disease that causes inflammation of the digestive tract, which lead to abdominal pain, diarrhoea, fever, weight loss, and other complications.

She tried a medication and various treatments for several years but her condition did not improve. About a year ago, the doctor recommended her to try medication injection, and her body weight has increased after that. She needs to continue with the medication, but it cost RM30,000 a year. Her parents can’t afford the medication fee, hence, they approached One Hope Charity for help.

【The doctor suggested that she try the medicine for one year, and then adjust the volume of the medicine according to her situation. Last year, One Hope Charity had helped her with RM14,000, and now, she needs to raise another RM30,000】

In 2008, when Sugantini was 16 years old, she often suffered from abdominal pain, diarrhoea, vomiting, loss of appetite and unable to eat. Her condition did not get better after repeated medical treatments, and the doctors could not find the cause to her condition. She was diagnosed with Crohn’s Disease after a year when she underwent a detailed examination. Her weight dropped by 10kg in two years.

For the first three years after she was diagnosed with Crohn’s Disease, she took the medicines but it did not help to improve her condition. She also tried other alternative treatments, which failed to help her. In 2017, her weight plummeted to 22kg, and she was unable to walk. She needed to rely on a wheelchair when she went for regular follow-up visits. At that time, due to the ulceration and stricture of her intestines, the doctor was forced to perform surgery to remove her ulcerated intestines. She used an external anal pouch for six months before she had her intestines repair surgery.

During the 12 years of treatment, her medical expenses were covered by the insurance. However, her claims had exceeded the RM200,000 limit, and her father had to sell the house for her treatment.

In November last year, a new medicine proposed by the doctor showed its effectiveness. Her weight increased from 22kg to 27kg. The doctor suggested that she continue with another year of treatment, and then make adjustments according to her situation.

Her 58-year-old father Ragu A/L Veloo was a supervisor in a factory. In 2020, he suffered from pulmonary fibrosis and was unable to work as he often experienced shortness in breath. He has been receiving monthly financial aid of RM2,475 monthly through Socso. Her 55-year-old mother K. Yugaswari A/P V. Kali is a housewife but she suffered a stroke two years ago, and she is currently recuperating at home.

The parents and child’s medical expenses cost about RM500 to RM600 a month, and the family can’t afford the RM30,000 medication fee. In addition, her injection is due and has been delayed, and the helpless parents are worried as they are unable to raise the medical fee needed.

After reviewing the case, One Hope Charity decided to raise RM30,000 for Sugantini’s medications. Her family members agreed to authorise One Hope Charity in taking charge of the fundraising and collect donations from the well-wishers on their behalf.