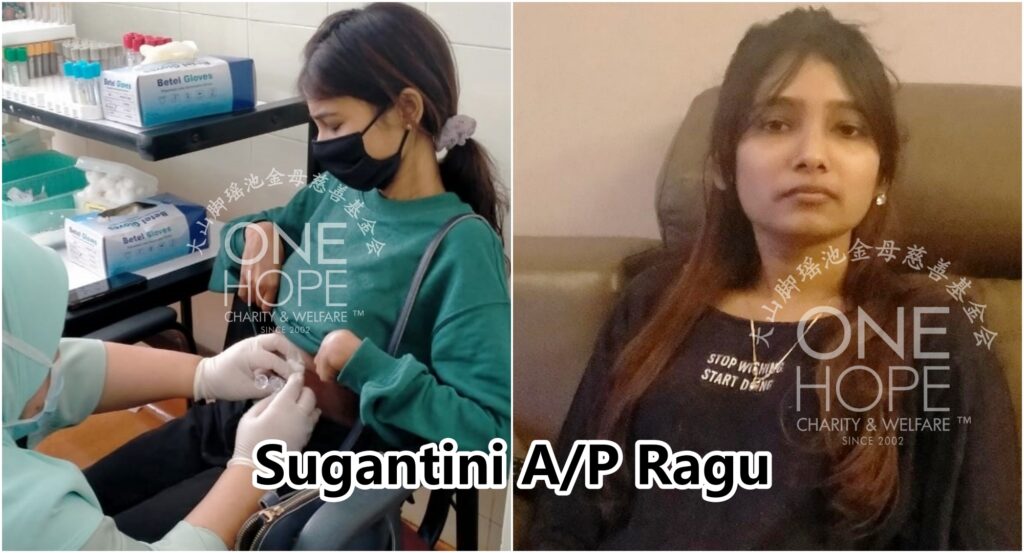 She was diagnosed with Crohn’s Disease when she was 16 years old. The now 29-year-old woman is not only suffering from the disease, but her parents also forced to sell their house and exhausted their savings to treat their daughter. Last year, her condition improved after she started medication treatment, and the doctor suggested her to continue with the treatment. However, the family can’t afford the medication fee, hence, they plead the public to help.

Sugantini A/P Ragu from Klang in Selangor, was diagnosed with Crohn’s Disease when she was 16 years old. She often suffers from stomachache, diarrhea, and vomiting, and she has no appetite to eat. She became very skinny, and her weight dropped to 26kg at one time. Her health condition was worrying.

The doctor then suggested her to try a new medication. She is from a family with financial difficulties, and they cannot afford the RM30,000 in medication fee, so they approached One Hope Charity for help. Fortunately, with the help from everyone, her medication fee was raised in just six hours, so that Sugantini can continue her treatment with the new medication.

The new medication helped Sugantini a lot. After she started taking the medication, she did not face any side effects, and her condition improved. Most importantly, she gained weight. She used to be about 26kg and now, she is 34kg.

Before this, her parents had sold their house and used up all their savings to treat their daughter. Last year, their daughter started the new medication with the help from the public, and her condition improved. And now, she needs to continue with the medication. Without other way, they turned to One Hope Charity again for help, hoping to get public donations of RM30,000 for the cost of a year’s medication.

Sugantini and almost all her family members are suffering from different kind of diseases, except her 26-year-old brother. Her father Ragu A/L Veloo suffers from pulmonary fibrosis. He will experience shortness of breath when he walks or moves too much, so he can’t work like normal people. He can only rely on Social Security Organisation’s (Socso) aid of RM2,475 a month to support the family. Her mother K. Yugaswari A/P V Kali suffered a stroke and has mobility limitation and blurred vision, while the daughter Sugantini needs monthly injection due to Crohn’s Disease. Her brother is a warehouse supervisor earning RM3,000 a month. After deducting the cost for their daily expenses, all his salary goes to medical treatment of his family members, so they can’t afford Sugantini’s medication fee.

After reviewing the case, One Hope Charity decided to assist her again in raising RM30,000 for her medication fee. Her family agreed to fully authorise One Hope Charity to take charge of the fundraising and collect the donations from the well-wishers on their behalf.