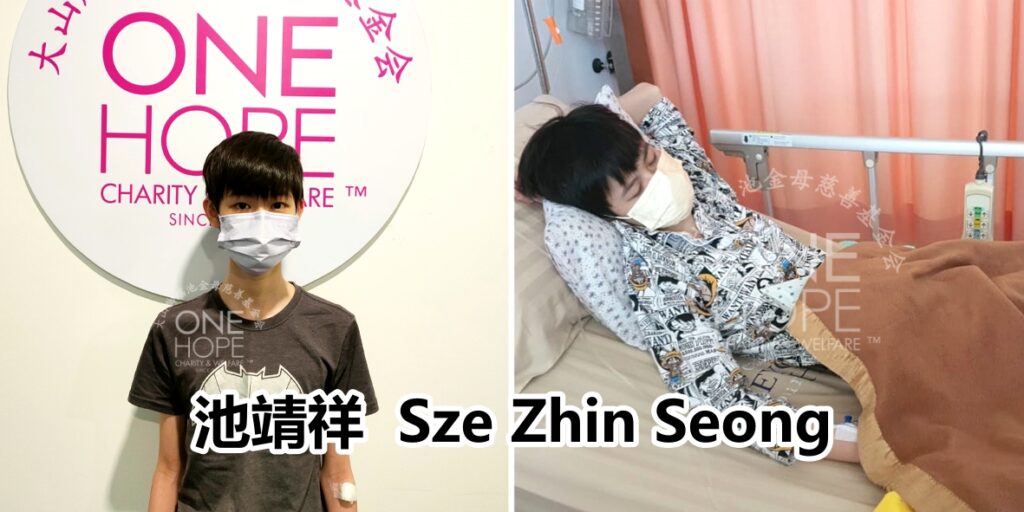 He is 17 years old, but he is smaller in size compared to other children of his age since young. Despite of his size, he managed to grow up safely and healthy. However, he started to experience shortness of breath after walking a few steps since last year. He was diagnosed with idiopathic pulmonary hypertension. He needs RM30,000 in medical expenses to undergo right and left heart catheterisation.

Sze Zhin Seong from Malacca is 166cm tall but weighs only 35.6kg. His size makes his family mistakenly believe that his digestive system is not well which affected his nutrients absorption. After examination, it was found that their child has a small hole in the heart but it was not an issue. The swelling of his heart and lungs was his most serious problem. If his condition is being ignored, it will lead to heart failure and his life will be in danger. His parents blamed themselves after learning about their son’s condition and hope that the public can help to save their child.

【He experienced shortness of breath when he walked since a year ago, and the doctor referred him to a specialist hospital for emergency treatment after he was found to have cyanotic nails】

Zhin Seong was admitted to hospital twice due to infection when he was born. At the age of 10, he had a flu and cough due to haze, and at that time, the parents thought that his lungs were weak, and he started to boost his immunity through Chinese medicin. However, starting from last year, he started to experience shortness of breath even when he walked from the school gate to his class.

His parents brought him to a Chinese medicine practitioner and found that his pulse was abnormal, and his fingers were cyanotic. The Chinese medicine practitioner suspected that he has a heart problem and urged the parents to bring Zhin Seong to the hospital as soon as possible for examination. The hospital later referred him to the National Heart Institute for thorough examination, and the result showed that his condition was serious. The hole in the heart is not a problem, but the swelling of his heart and lungs is something serious.

At present, his pulmonary pressure is too high, and he needs to control lungs pressure so that it won’t continue to increase, otherwise, it will affect his heart function, and if the problem continues, it will lead to heart failure, or even heart replacement. Therefore, he needs to undergo right and left heart catheterisation.

His parents are distraught and helpless. Seeing their son suddenly fell into serious illness, the parents blamed themselves. Furthermore, they are unable to bear the RM30,000 in medical expenses, so they approached One Hope Charity for help.

The doctor told them that the journey of treatment is still long, he might need to rely on medicines to control the pulmonary pressure, so the parents must be strong to deal with it.

His 55-year-old father Sze Chian Tat was a supervisor in a club house but the club house closed down due to the pandemic. He is now an assistant in a grocery shop, earning RM2,000 a month. His 48-year-old mother is a clerk with a monthly salary of RM1,500. The couple have four children, and Zhin Seong is their youngest son. The mother plans to resign and take care of him at home.

After reviewing the case, One Hope Charity decided to help Zhin Seong in raising the RM30,000 in medical expenses. His family agreed to fully authorise One Hope Charity to take charge of the fundraising and collect the donations from the well-wishers on their behalf.