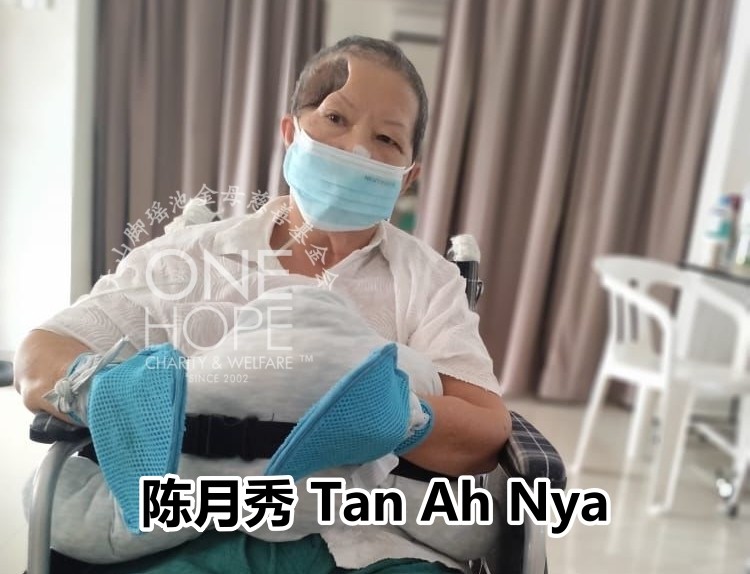 With the blessings and donations from the public, a loving and hardworking mother completed three surgeries due to a ruptured brain aneurysm. The surgeries were successful and she survived but she still has to undergo a cranial surgery which cost RM25,000. Her children plead the public to help their mother so that she could undergo the last surgery.

On June 16 morning, 65-year-old Tan Ah Nya from Penang Island had brain hemorrhage and ruptured brain aneurysm, where the blood almost filled up 60% - 70% of her brain. Her condition was classified as serious stroke and she needed to undergo emergency surgery to stop the bleeding, as well as to clear the blood clot in her brain.

After the stroke, Ah Nya underwent three brain surgeries, and  was treated  in the intensive care unit (ICU). Her medical expenses hiked up to RM170,000, of which RM40,000 was paid through her insurance, about RM70,000 borne by her children and the remaining RM68,000 was raised by One Hope Charity within a short period.

During the surgery earlier, the doctor removed her cranium to clear the blood clot in her brain, and her family members planned to transfer Ah Nya back to the government hospital for cranial implant surgery to reduce the medical expenses.

After studying Ah Nya’s case, the doctor-in-charge advised them not to delay on the cranial implantation surgery, as the delay of the surgery might affect her head, and the original skull would not be able to fit anymore.

However, a cranial implantation surgery at a specialist hospital cost RM30,000. As they finished their savings on their mother’s earlier medical fee, they could only raise RM5,000 from their relatives and friends. The could not afford the remaining RM25,000, hence they once again came forward to seek help from One Hope Charity.

The family could not afford the huge sum of medical fee. After reviewing the case, One Hope Charity decided to help Tan Ah Nya once again to raise RM25,000 medical fee she needed. Her family members agreed to authorise One Hope Charity to take charge of the fundraising and collect public donations on their behalf.