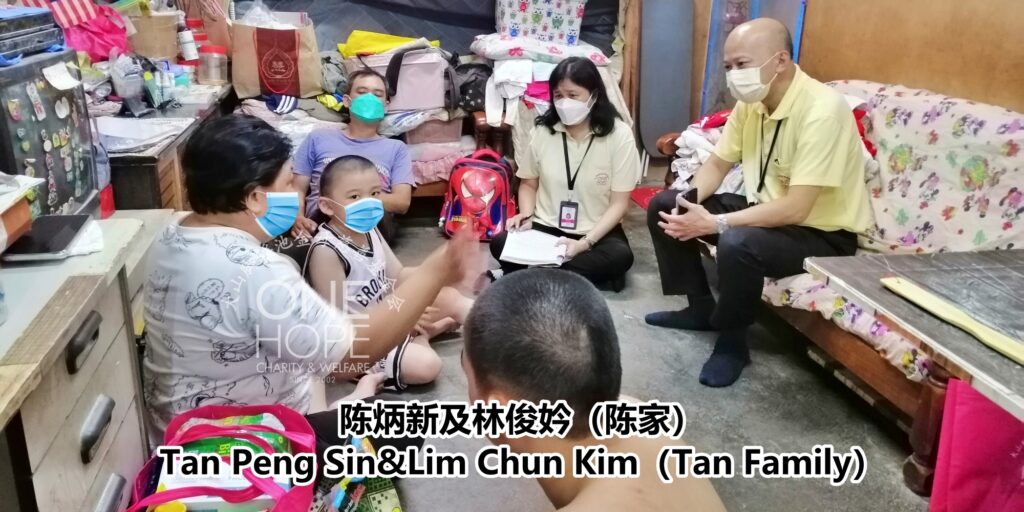 A woman can always stay strong for her family. A 44-year-old woman has a rough life – her husband has epilepsy, her two children are children with special needs, and she has only one kidney left. However, she needs to work and play the role as the head of the family to take care of her husband and children. She often burned out in order to support the livelihood of her family.

Lim Chun Kim from Butterworth, Penang, needs to take care of her husband with epilepsy, and fetch her children to and from schools and hospital. She can only take up some jobs that allow her to work from home, such as packaging worker, to earn money and support her family. However, the meagre income could not support the family of five, so she applied some financial aids, but sometimes, the family will still starve as they don’t have enough money for food.

Chun Kim’s 49-year-old husband Tan Peng Sin has suffered from epilepsy for many years. His condition has been so severe in recent years that he has been unable to work. Their 19-year-old eldest son suffers from mental illness, and the 13-year-old second son has learning difficulty. Their seven-year-old youngest son is now in Year One. After reviewing the case, One Hope Charity decided to adopt the family of five, and raise RM80,000 for their living expenses, education fees and medical expenses, so that they can have a stable life for four years.

【One of Lim Chun Kim’s kidney was removed due to kidney failure, and she has only one kidney left. However, she still work hard to support her family】

Chun Kim’s first husband passed away many years ago. After that, she brought along her eldest son, who suffers from mental illness, and remarried to her current husband Peng Sin. At that time, her husband who suffered from epilepsy could still work in a restaurant, while Chun Kim worked as a tailor. Although they were not well-to-do, but their income then could still support the family. After that, she had her second and third sons.

Her husband’s condition deteriorated in 2018. He often felt dizzy and fell. He had epileptic seizures almost two to three times a week, which made him unable to work. He fell on the exhaust pipe of his motorcycle and suffered burn once after he lost balance as he was dizzy. Therefore, Chun Kim can only work as a packaging worker at home, earning about RM300 a month. Her two children also receive a monthly special child aid of RM150 each.

In addition to taking care of her children, she needs to fetch them to and from the schools and send her husband and children to the hospital for follow-up treatment. She also needs to take care of the meals of her family members and earn money to support her family. Sometimes, she was too busy which resulted her to forget to take care of herself.

In 2001, she went for medical treatment due to swollen feet and unable to pass urine. She was found to have left kidney failure and it was removed, so she has only one kidney left. About seven years ago, she was found to have tumours inside and outside of her uterus, and the doctor suggested her to undergo a surgery. However, she delayed the surgery as no one could take care of her children.

Her 19-year-old eldest son suffers from mental illness and is currently undergoing his final year of gardening course in a special school. Her 13-year-old second son has learning difficulty and is in remove class at a normal secondary school. Both the children hold a disabled person card from the welfare department, and they also receive monthly financial aid of RM150 each through their schools. Her seven-year-old youngest son is in Year One, and he only takes formula milk every day. The family of five lives in a People’s Housing Programme (PPR) flat in Butterworth, but they have owned a few thousands ringgit in rent.

The family agreed to fully authorise One Hope Charity to take charge of the fundraising and collect the donations from the well-wishers on their behalf.