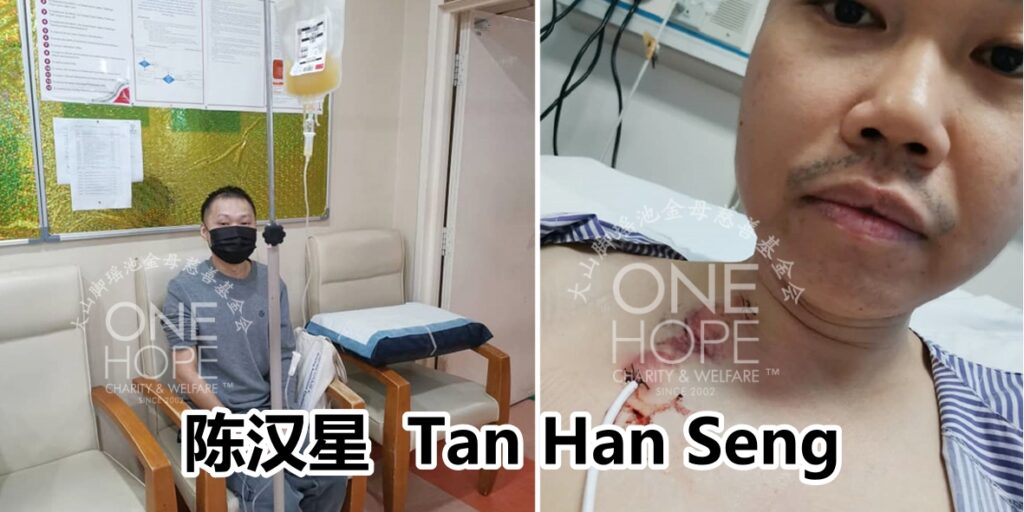 He experienced frequent dizziness and shortness of breath, and was later diagnosed with primary myelofibrosis (PMF). The 33-year-old Tan Han Seng received a 100% matched bone marrow transplant from his elder brother, but the number of his red blood cells, white blood cells and platelets dropped drastically due to Covid-19, so he needs to undergo blood transfusions twice a week.

Fortunately, the bone marrow transplant was successful, so the doctor suggested him to undergo CD34-selected Stem Cell boost treatment, where positive selection of CD34 stem cells will be performed on a self-purchase ClinicMACS device and the CD34-selected stem cell boost will later be transfused to the patient. The family hope that the public can help them with the shortfall of RM34,000.

【His 35-year-old only brother became a bone marrow donor. He received the bone marrow transplant from the brother. He hopes that he can make money to honour the parents after he recovers】

33-year-old Tan Han Seng from Ulu Yam, Selangor, suffered from frequent dizziness and shortness of breath since March 2019. The doctor suspected that he suffered from ischemia and referred him to a nearby hospital for treatment. The doctor informed that he was suffering from malnutrition and gave him a blood transfusion. Unexpectedly, he experienced dizziness again three months later. He went to seek medical treatment and the doctor found it was unusual, and referred him to the hospital.

He later went for a bone marrow test at the Ampang Hospital. In September 2020, the report showed that he had primary myelofibrosis, and his condition was controlled by medication. It is a chronic bone marrow disorder that is characterised by abnormalities in blood cell production and scarring within the bone marrow. The common symptom is anaemia. Myelofibrosis causes large areas of the bone marrow to become fibrous, leading to severe anaemia that can cause weakness and fatigue, and in severe cases, the blood platelet count will drop drastically, which increases the risk of bleeding.

The doctor suggested him to undergo a bone marrow transplant. Fortunately, his 35-year-old only brother’s bone marrow was 100% matched and he was willing to donate the bone marrow to his younger brother. The bone marrow transplant was conducted in April 2021 after completing seven days of chemotherapy. After the surgery, he stayed in the hospital for three weeks before he was allowed to return home. His red blood cell index resumed normal after that.

In January this year, when he was about to return to work, he was tested positive for Covid-19. He started to experience dizziness, shortness of breath and itchiness over his body. He returned to hospital to seek medical treatment, and was told that the blood index had dropped drastically. And now, he needs to undergo blood transfusion twice a week, otherwise he will have symptoms such as dizziness, shortness of breath, and other symptoms due to anaemia.

The doctor also informed that he is not suitable for the second bone marrow transplant as he has antibodies and the rejection rate is also high. In addition, he still has 99% of his brother’s bone marrow in his body, so he is suitable to undergo CD34-selected Stem Cell Boost treatment. He needs to self-purchase the ClinicMACS CD34 Reagent Set in order to produce CD34-selected stem cell boost, which will be infused to the patient after that. However, the huge cost made him and his family worried.

Han Seng is unmarried and he works as a technician in a factory, earning RM2,250 a month. He suspended his job after he fell ill, and his parents, aged 70 and 63, have also retired. They live on their savings while his 35-year-old brother, who runs an online business, also helps in supporting the family’s expenses. The medical fee is huge, so they seek assistance from the public for the remaining RM34,000.

After reviewing the case, One Hope Charity decided to help in raising the shortfall of RM34,000. The family agreed to fully authorise One Hope Charity to take charge of the fundraising and collect the donations from the public on their behalf.