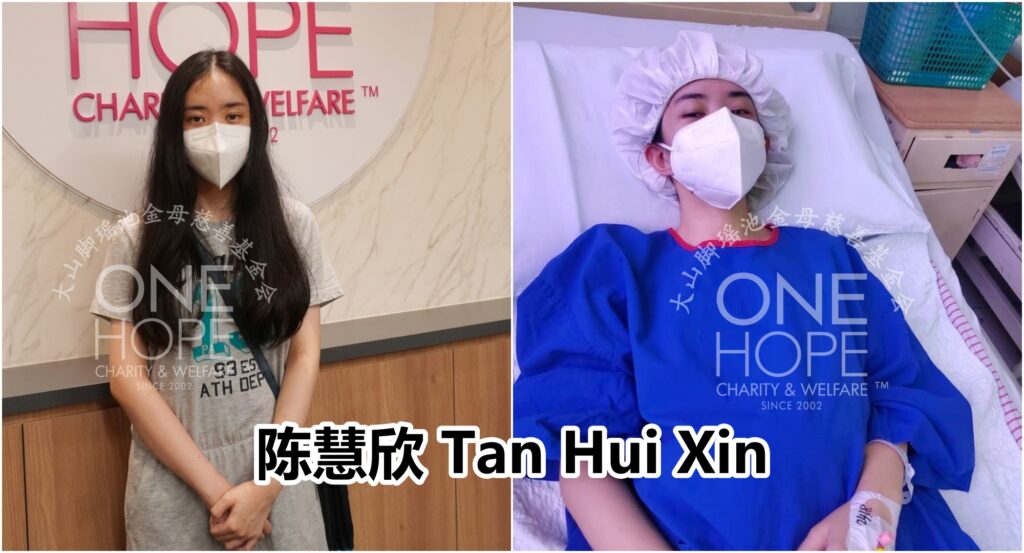 ***A total of RM18,000 from the “Emergency Medical Reserve Fund” has been channelled, hence, One Hope Charity will only launch a fundraising of RM72,000 for this case.***

21-year-old Universiti Sains Malaysia (USM) student was diagnosed with heart disease when she was born. She has undergone three heart repair surgeries. Although she suffered from heart problems, but she worked very hard in her studies and was enrolled to the university with good grades. However, a recent follow-up visit revealed that her blood vessels were stiff and required a fourth surgery. She pleads the public to help her in surgical fee to continue her life.

Tan Hui Xin, a 21-year-old student from Bukit Mertajam, Penang, is the only child of her parents. Although she has a heart defect and suffers from shortness of breath and cyanosis, but she worked hard to pursue her dreams. She is now a Bachelor of Management’s student in USM, and she wanted to continue with her career in the financial industry after she graduated from the university.

When Hui Xin was born, she slept for 23 hours a day due to lethargy, and her body became cyanotic, which made her family members worried. After a thorough examination, she was diagnosed with a heart defect, namely the pulmonary atresia combined with ventricular septal defect (PA-VSD). It is a complex congenital heart disease.

Hui Xin underwent her first surgery when she was 17 days old, and then had her second and third surgeries at the age of one and six. The surgery she went through when she was six, was called Rastelli. Although she had several surgeries, but she has been a resilient girl.

However, during a regular follow-up visit in August this year, the doctor informed that her cardiovascular system was stiff, and she needed her fourth surgery.

【Hui Xin: It was not an easy task for my parents to take care of me since young. I want to study hard, enter into the university and make them proud】

After she went through three surgeries when she was a child, Hui Xin grew up like the other children. She has been controlling her condition by taking medicine. As she suffered from shortness of breath and cyanosis, she was exempted from all intense exercise at school.

Hui Xin was active in the Chinese Orchestra, playing Erhu at school. She originally had the opportunity to perform in China, but her parents were worried that she would not be able to adapt to the cold climate in China, so she had to withdraw from the performance. Despite her illness, she is still determined to be strong. She received outstanding results in her SPM and STPM, and she managed to enter USM to further her studies.

Her 56-year-old father Tan Chee Seng set up his own toys’ distribution company. He earns about RM3,000 a month, and the income is merely enough to cover the family’s living expenses. Her 53-year-old mother Lim Eng Har has been a housewife since she was pregnant.

The couple originally saved a sum of money as their daughter’s medical fund. However, the money had to be used to cover their living expenses due to the Covid-19 pandemic. And now, there was not much money left, so they had to seek help from the public to raise the medical expenses for their daughter.