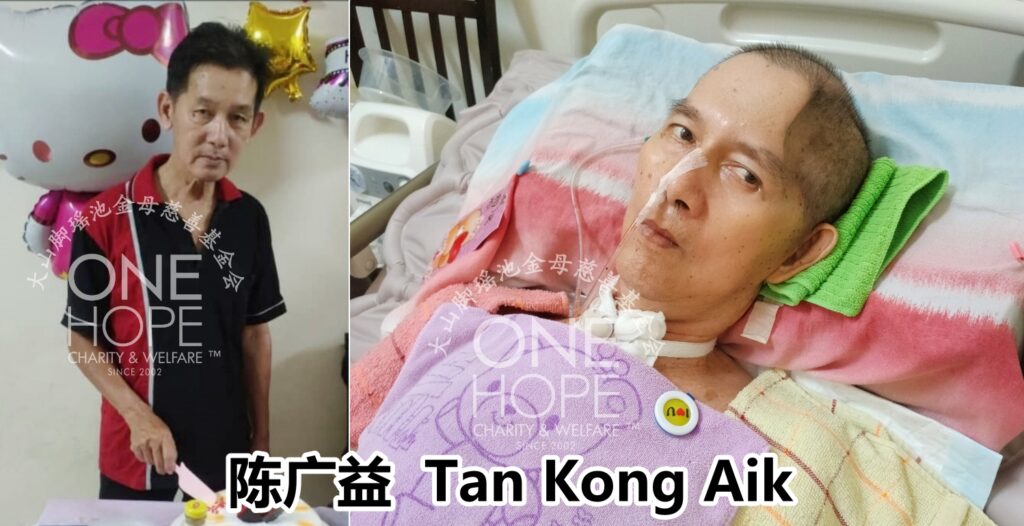 57-year-old Tan Kong Aik paralysed after he met with an accident early this year. His condition gradually improved after physio therapy sessions, but since a month ago, he has been frequently attacked by seizures. The doctor found that the seizures happened because his bone flap was temporarily being removed, which affected his brain waves. In addition, he also suffered from hydrocephalus. Therefore, he needs to undergo two surgeries in one go – to put back his bone flap, and to implant a shunt in his brain.

Due to the frequent seizures, Kong Aik’s wife and two daughters need to take turns to take care of him day and night, fearing that he might be in danger and lost his life. The doctor told them that Kong Aik might have a chance to recover, and even to walk or resume his normal life after the surgeries.

It was supposed to be a happy family living comfortably but the head of the family collapsed suddenly has left the family helpless with some financial difficulties. However, the recommendation by the doctor for him to undergo skull surgery, as well as to implant a shunt in his brain has given the family some hopes, but the family is helpless as they could not afford the RM65,000 surgical fee.

Kong Aik also knew that the surgical fee is expensive. He shed tears as he could not speak to express his feelings. We hope that generous individuals could come forward to help the family.

【His wife and daughters take turns taking care of him throughout day and night as they are worried that he might be in danger. The family hopes that Kong Aik could undergo surgery and resume back to his normal life as soon as possible】

Kong Aik from Simpang Ampat in Penang was a hawker selling Tom Yam noodles. On Jan 8, when he was on his way home after sending his daughter to work, he met with an accident and was sent to a government hospital. An examination revealed that he suffered from cerebrovascular occlusion and he gone through an emergency surgery. As he was paralysed, the doctor suggested him to return home for his rehabilitation on February 5. With the help of their relatives and friends, the family bought a hospital bed, phlegm suction pump, oxygen concentrator, ripple-mattress, and other equipment.

After returning home, Kong Aik fell into a semi-comatose state. His bone flap was removed and he could not move even when he was conscious. After went through physiotherapy and acupuncture sessions, his hands and feet slowly regained its senses, and he also learned to lift his hands and feet. However, he still needs more time to learn, undergoing physiotherapy sessions and to recover before he could take care of himself.

He can only drink special milk formula and he also needs a lot of adult diapers. In addition, he needs to attend several physiotherapy and acupuncture sessions a week, which cost at least RM3,000. Therefore, the family has used their savings to barely support their lives.

At that time, after reviewing the case, One Hope Charity also provided him with the cost of milk formula, adult diapers, physiotherapy and acupuncture sessions fees for a period of two months.

In the past month, Kong Aik was frequently attacked by seizures. The doctor informed that he suffered from cerebrovascular occlusion. He also needs to put back his bone flap to reduce seizures. The two surgeries cost RM65,000.

His 46-year-old wife Ooi Choon Hua is a babysitter, earning RM700 a month. After the accident, she and her two daughters, aged 23 and 16, have been taking turns to take care of her husband.

Currently, the family relies on their 21-year-old son, who works as a designer for a steel factory, to support the family with a monthly salary of RM2,500. He also bears a monthly house rental of RM700, food, medical and other expenses of the family and his father.

The expenses the father needed is a burden to the family as they are not well-to-do. They hope that the public could help them to overcome the difficulties.

The doctor also informed that if the two surgeries are not performed, Kong Aik’s cerebrovascular occlusion might get worsen and affected his brain, which might be life-threatening. Therefore, he needs your help.

After reviewing the case, One Hope Charity decided to help him. The family agreed to authorise One Hope Charity to take charge of the fundraising and collect donations from the public on their behalf.