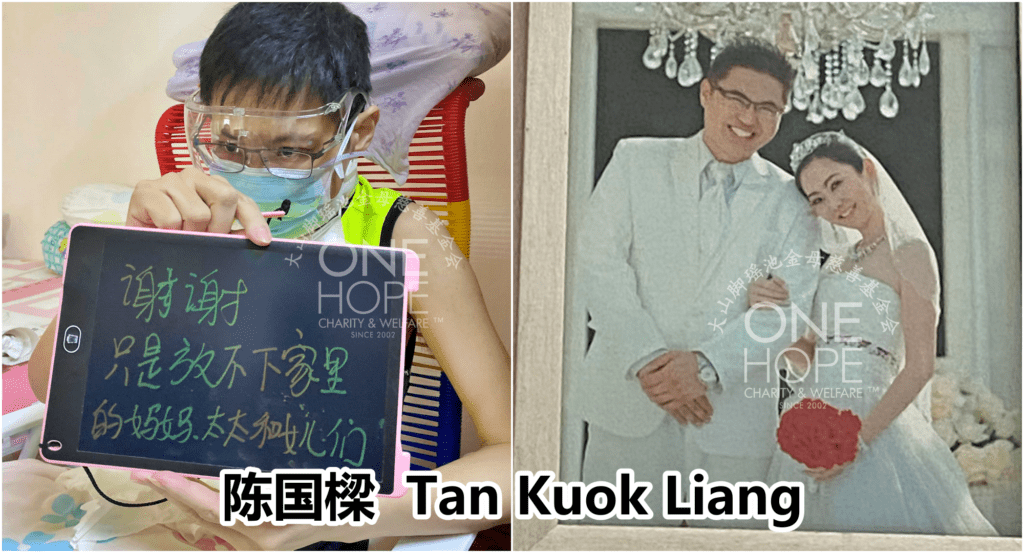 A couple in Penang was diagnosed with cancer one after another. They are still fighting against cancer. Not only must the couple worry about the huge amount of medical fees, but also worry about the future of their two young children. They hope that the public can extend a helping hand to assist them get through the life challenges.

This hapless family is from Bayan Lepas in Penang Island. The wife, Chao Wei Tze, was diagnosed with cervical cancer two years ago, and she has been well taken care of by her 39-year-old husband, Tan Kuok Liang. Unfortunately, the husband was diagnosed with tongue cancer in October last year, and his condition deteriorated quickly.

There were two patients who required medical treatment in the family. Kuok Liang had no other choice but to quit his job as a medical equipment salesman and became an e-hailing driver. The flexible working hours allowed him to send his father and wife to the hospital for their chemotherapy sessions and follow-up visits. However, his father died of cancer a week after his wife was discharged from the hospital.

【The husband is at stage IV of tongue cancer. He only has 1/3 of his tongue left, and he can’t speak anymore. He can only communicate through the children’s drawing board】

In October last year, Kuok Liang’s tongue often ulcerated. After the examination, the doctor confirmed that he had stage IV tongue cancer. He was given seven cycles of chemotherapy, and he had to be hospitalised for six days for each chemotherapy cycle.

Due to the sequelae caused by chemotherapy and radiotherapy, Kuok Liang is now unable to speak. The cancer cells also caused part of his tongue to be necrotic, and now, he only has about 1/3 of his tongue left.

During the home visit by One Hope Charity’s team, he used a children’s drawing board to answer questions. He also often coughs and vomits, sometimes when a sputum is stuck in his throat, and sometimes due to the secretion of the tumor. Whenever he tries to vocalise, he will be in extreme pain.

But this is not the end of their story…

【In September this year, his wife’s cancer recurred and the cancer cells spread to the liver】

His wife, Wei Tze suffered from cervical cancer two years ago. After the chemotherapy cycles, she also went for her regular follow-up visits. In September this year, she went to the hospital for follow-up visit. The doctor found out that her liver had problems. After thorough examination, it was confirmed that the cancer cells had metastasized to her liver, so she must undergo radiotherapy.

Wei Tze needs to undergo 30 sessions of radiotherapy. After the radiotherapy, she experienced pain in her waist and thighs, and she was unable to walk. She would also be in huge pain when she tried to turn her body over, or when she laid down on an improper position.

Although cancer that affected their health has left the couple in torment, but they are still very active in fighting the disease. Their two children, aged seven and four, are their main source of strength.

The husband and wife are now unable to work. They are unable to afford their own medical aids and expenses, as well as the living and education expenses for their two children. Hence, they approached One Hope Charity for help.

Kuok Liang was a medical equipment salesman earning about RM4,000 to RM5,000 a month. After his father and wife became ill, he quit his job and became an e-hailing driver with a monthly income of about RM3,000. And now, he is ill and is unable to work anymore. His wife, Wei Tze was an administrative clerk before she was pregnant, and she became a full-time housewife after their child was born.

Kuok Liang is now being taken care of by his elderly mother. He is the eldest son in the family, and he has two younger brothers and a sister. One of his younger brothers is still schooling.

Since Kuok Liang’s elderly mother is unable to take care of two serious cancer patients, his wife and two daughters have temporarily moved back to his in-laws’ place, so that his parents-in-law can help to take care of Wei Tze and the children.

After reviewing the needs of the couple, One Hope Charity decided to raise RM150,000 for the couple’s medical and their children’s living expenses. The family agreed to authorise One Hope Charity to take charge of the fundraising and collect donations from the well-wishers on their behalf.