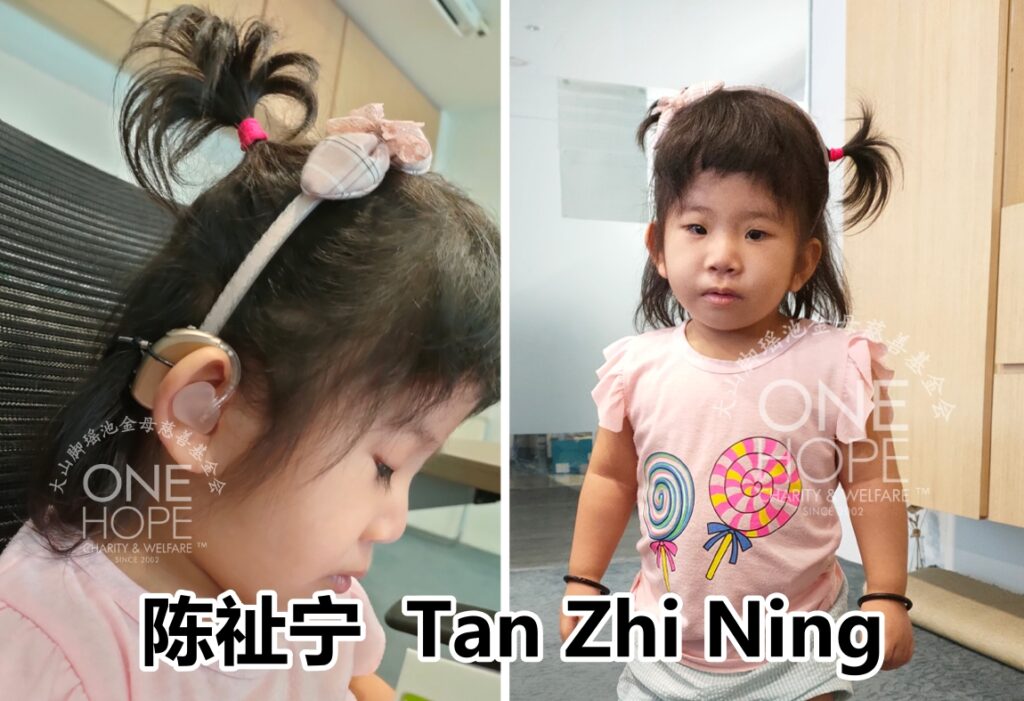 Although Tan Zhi Ning is just two, her life has been full of obstacles. She was found to have cyst in her brain before she was born, and she had undergone a surgery when she was two months old to remove the cyst. When Zhi Ning was seven months old, the doctor confirmed that both her ears could not hear. Hearing aids could not help her anymore, and she needs to undergo artificial cochlear implantation. However, her parents are unable to afford the RM87,000 fee she needs. Hence, they hope that the public can help them with the fee, so that little Zhi Ning can hear the voices around her as soon as possible.

Zhi Ning from Cheras in Kuala Lumpur is the first child of her parents. Since the mother learned that she was pregnant, the couple was always excited and looking forward to the arrival of their firstborn.

However, during the pregnancy, the doctor found out that there was a cyst in the fetus’ brain. When the baby was two months old, the doctor performed a surgery on her to remove the cyst.

Just when the parents thought that their daughter could grow up healthy and safe after the surgery, they discovered that little Zhi Ning wasn’t reacting much to sounds around her. She did not respond when someone banged the door, or someone called her name from the back.

The parents brought her to the hospital for an examination. During the hearing test, she did not react to the any sounds the doctor played. The doctor confirmed that she has hearing loss in both her ears.

However, little Zhi Ning’s hearing has not improved after she wore the hearing aids for many months. The doctor then recommended her to undergo cochlear implantation so that she can hear.

Hearing ability is very important for a child. If a child cannot hear, it will affect the ability and development of speech. Therefore, the soonest she receives the cochlear implantation, the smaller the impact on her in the future.

Her 41-year-old father Tan Ee Ming is a chef in a hotel, earning about RM3,200 a month. Her 37-year-old mother Chin Wai Lee was a worker in a restaurant. However, under the advice of the doctor, she quitted her job to take care of her sick daughter in March last year before the implementation of the MCO.

After reviewing the case, One Hope Charity decided to help little Zhi Ning to raise the RM87,000 she needs. Her family members agreed to authorise One Hope Charity to take charge of the fundraising and collect donations from the well-wishers on their behalf.