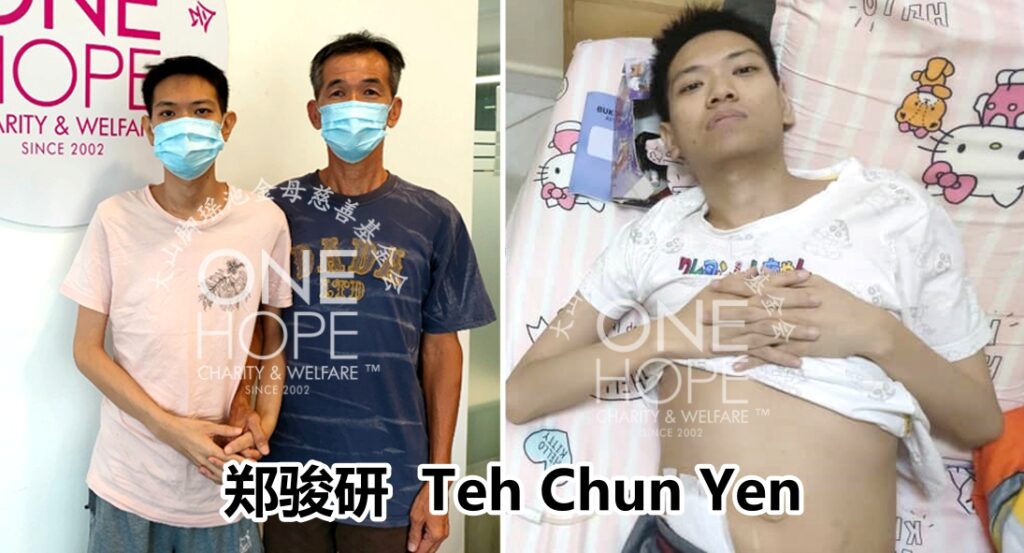 “My son, you have to be strong. Daddy can lose a kidney, but I can’t live without you.”

The father loves his son so much. His son suffers from kidney failure and his 57-year-old father did not hesitate to donate one of his kidneys to his son. However, they could not afford the RM120,000 kidney transplantation fee. The father and son begged for public donations so that the son could have a chance to continue his life.

30-year-old Teh Chun Yen is from Kuala Lumpur. When he was 21 years old, he suddenly felt numbness in his leg, edema and loss of appetite. He went to a clinic near his house and the doctor found out that there was too much foam in his urine. The doctor suspected that he had kidney problem and suggested him to undergo an examination at the hospital.

After thorough examination, he was diagnosed with early stage kidney failure, and the doctor prescribed medicines. However, after taking the medicines for three years, the medicines were unable to control his condition anymore. Since then, Chun Yen started peritoneal dialysis (PD) where he underwent PD four times a day. He was unable to work since he started PD.

Three years after he started PD, in one of his follow-up visits, the doctor informed him that his condition was unstable, and he needed to use a dialysis machine to perform dialysis. As Chun Yen is still young, the doctor suggested him to have a kidney transplant, so that he could regain the quality of life, otherwise, he would have to continue with dialysis until the end of his life.

In early 2019, his father Teh Foo Heng did a preliminary test, but he gave up on the following series of tests due to Covid-19 and financial problems. Until recently, the hospital sent them a good news – there was a suitable kidney from a deceased for Chun Yen. However, they missed the opportunity of kidney transplant due to financial problems.

As the son had already missed two opportunities for kidney transplant, and seeing how the son suffers from dialysis, the father felt very guilty.

He knew that he would be 60 in a few years, and he might become weaker. Several months earlier, he consulted a doctor and confirmed that his current condition is suitable for kidney transplant, and this is also the best time for his son to accept a new kidney.

However, the cost of kidney transplantation is amonting to RM120,000, and the family could not afford the expenses, hence, they approached One Hope Charity for help, hoping that their case could gain public attention and receive some donations from the public.

【The family’s company and encouragement helps him to stay strong】

Chun Yen said that he did not have hypertension and diabetes. He collapsed when he knew that he has kidney failure. He could not accept the fact that he has to undergo dialysis at such a young age. However, he is very close with his family members. They always gave him full support, which encouraged him to stay strong in fighting against kidney disease.

“It is my family who has supported me so far which enable me to stay strong until today.”

Maybe the father did not speak out his love, but Chun Yen can feel the love of his father through actions. When he knew that his kidney was suitable for his son, Foo Heng was not afraid, and he did not hesitate to donate one of his kidneys to save his son.

Chun Yen was a chef but he has to stop working since he started dialysis. His father Foo Heng is an odd job worker, earning about RM1,700 a month before the movement control order. His 59-year-old mother Khoo Yeok Lan is a housewife; while his 25-year-old brother Teh Chun Tou is an insurance agent, with a monthly salary of about RM1,100.

After reviewing the case, One Hope Charity decided to help the father and son. The family agreed to authorise One Hope Charity to take charge of the fundraising and collect donations from the well-wishers on their behalf.