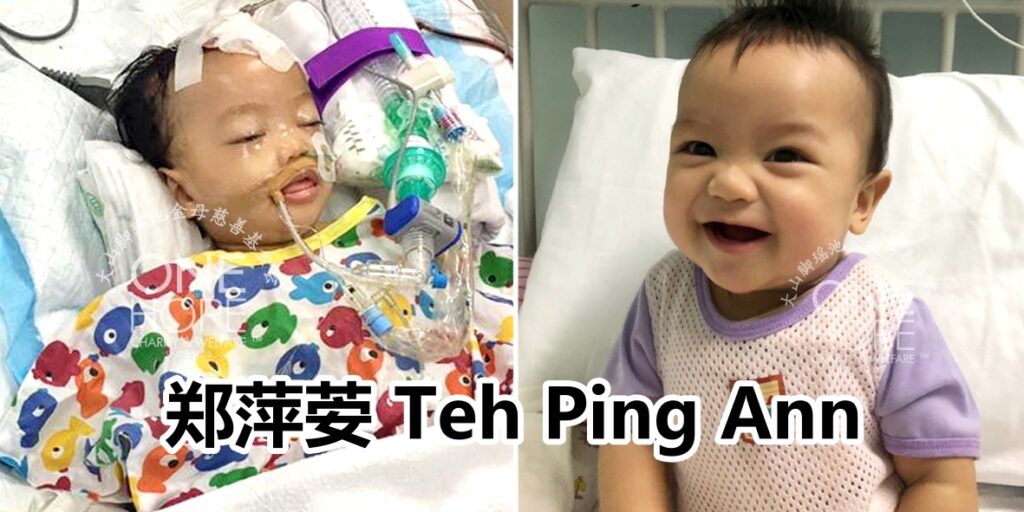 She was all set for the bone marrow transplant, but now, her brain is bleeding badly. One-year-old girl who suffers from a rare genetic disease is waiting for you to save her life!

Teh Ping Ann, the one-year-old girl with rare genetic disease, finally entered Singapore. She is waiting for her father to donate his bone marrow so that she can continue to survive. When she is ready to undergo the bone marrow transplantation, she experienced unexpected brain haemorrhage and is in danger. The doctor performed emergency craniotomy to stop the bleeding and she is temporarily saved.

Ping Ann from Bukit Mertajam in Penang, raised enough medical expenses for her bone marrow transplantation in Singapore through a fundraising launched by One Hope Charity in December last year. And now, due to an emergency, she needs another RM800,000 in medical expenses. Her parents beg the public to give their child another chance to be saved.

【Only a bone marrow transplant can prolong her life, and it needs to be done within the golden window to avoid another rupture of blood vessels in brain that may threatens her life】

The bone marrow transplantation was originally scheduled on 22 February. Ping Ann and her parents flew to Singapore on 28 December last year to wait for the transplantation procedure. The completed their quarantine and was about to start the pre-operative examinations. Unexpectedly, Ping Ann suddenly developed epilepsy and was unconscious at around 3am on the second day of the Chinese New Year. She was rushed to the hospital and was confirmed that she had suffered severe brain haemorrhage. The doctor performed emergency craniotomy twice to remove the blood clots in the brain.

According to the doctor’s report, in order to avoid another brain haemorrhage, Ping Ann needs to stay in the hospital for continuous observation. Once her situation is suitable, the doctor will transplant her father’s bone marrow for her.

Due to her brain’s condition, the doctor will pay special attention to the medication used on her. The bone marrow transplant is expected to cost an additional S$250,000 (equivalent to about RM800,000).

Her 37-year-old father Teh Ghee Lim is an electronic engineer, earning RM6,800 a month. Her 30-year-old Indonesian mother Zen Meilani worked as a quality checker before marriage and became a full-time homemaker after they have their own child. The couple met at the factory where they worked and they have married for six years.

Ping Ann’s parents have already borne various expenses such as examination and inspection fees, and customs clearance fees, as well as the estimated cost of staying in Singapore for six months, amounting to about RM64,000. They are unable to afford the additional S$250,000 (equivalent to about RM800,000) in surgical fee, so they beg for public assistance.

【We have already lost our son. Since Ping Ann has a chance to survive, we don’t want to experience the pain of losing our lovely daughter】

In 2019, Ping Ann’s brother died suddenly when he was just five months old due to rupture of blood vessels in brain. There was no diagnosis before his death. It was not until the birth of his younger sister Ping Ann, who had shown the same symptoms (bruises all over the body) as the brother, which prompted the doctor to carry out a genetic test, which later revealed that the siblings suffered from congenital thrombocytopenia – SLFN14 mutation, which is a very rare genetic disease. Lacking of blood platelets in their body resulted them to experience internal bleeding that cannot be stopped.

Ping Ann suffered from cerebral haemorrhage in her left brain and the doctor had performed two surgeries to remove the necrotic brain cells. Although the function of the right side of her body is affected, but she is still young, and she is recovering well. Her parents did not give up on her, and we believe that the public will not give up on her too. Therefore, we hope that the public can give her a chance to continue survive and grow up healthily.

Her father’s bone marrow matches with hers and he has been identified as a suitable donor. However, the huge amount in medical expenses is still lacking. The parents beg for public donations. After a discussion, One Hope Charity decided to help her again in raising the RM800,000 medical expenses that are still lacking. Little Ping Ann needs your help, please help her.