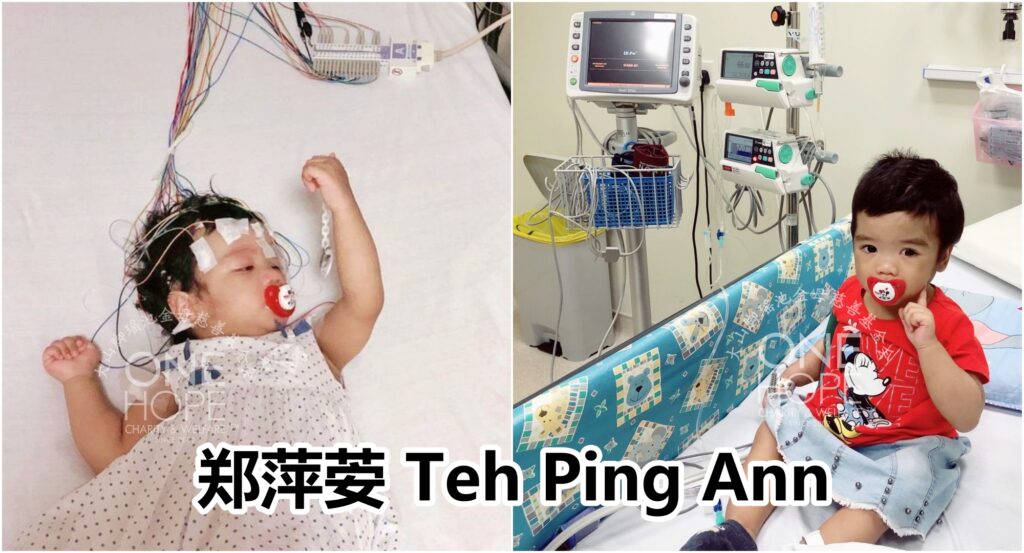 Being alive is a miracle and a hope!

Baby girl Teh Ping Ann from Bukit Mertajam, Penang, suffered from a rare genetic disease, where her bone marrow was unable to produce platelets. She was almost died from a severe cerebral haemorrhage, and the only way to treat her genetic disease was to undergo stem cell transplantation. Her loving father donated his bone marrow to save the daughter, and both of them did not give up, with the hope that the baby girl can continue survive.

However, they need to pay a high price for baby Ping Ann to stay alive. After baby Ping Ann completed her stem cell transplant, she had bacterial infection and other complications. The pain from various treatments the baby girl has to bear, as well as the huge medical expenses put the parents under great pressure. The parents hope that the baby girl can grow up healthily like the other children, so they plead the public to help them with RM290,000 in medical expenses.

【She once cheated death due to a severe cerebral haemorrhage in her left brain. The damaged brain cells have affected the movement of 18-month-old baby Ping Ann. One of her eyes is blind, but fortunately, her mental development is normal. The doctor was amazed and said: being alive is a huge miracle】

Baby Ping Ann suffers from congenital thrombocytopenia – SLFN14-mutation, a rare genetic disease. The doctor referred her to a hospital in Singapore, and suggested her to undergo a stem cell transplant. His father agreed to donate his bone marrow to save the daughter, but the baby girl suddenly had a cerebral haemorrhage two weeks before the stem cell transplant surgery. The doctor then performed a surgery to clear the blood clots and saved her life.

The father experienced an eight-hour stem cell transplantation surgery and two times of white blood cells donations to save his daughter. And now, baby Ping Ann needs to undergo Donor Lymphocyte infusion (DLI) every week, and at the same time, she needs to inject mild chemotherapy medication to avoid rejection.

After getting through a lot of challenges, baby Ping Ann was saved. Unfortunately, the complications from the stem cell transplantation caused her family to exhaust their savings and they have to borrow from their family and friends. The parents have been paying for their living expenses in Singapore for nine months, as well as RM50,000 in medical expenses. They are now pleading for public help to pay for the shortfall of RM290,000 in medical expenses.

Her 38-year-old father Teh Ghee Lim is an electronic engineer with a monthly salary of RM7,000. Her 31-year-old Indonesian mother Zen Meilani worked as a quality checker before marriage and became a full-time homemaker after they have their own child.

Ghee Lim admitted that he is considered receiving high income, but when he faces the huge medical expenses of his daughter, it is still something that he is unable to afford. He tried to borrow from his friends and family, and he also hopes that the public can help them. He promises to continue to help those in need within his ability in the future.

Baby Ping Ann survived. However, the complications after stem cell transplantation made her life at risk. After discussion, One Hope Charity decided to assist her in raising the shortfall of RM290,000 in medical expenses. Baby Ping Ann needs your help to get through this life challenge, and we hope that all well-wishers can step up to help her.