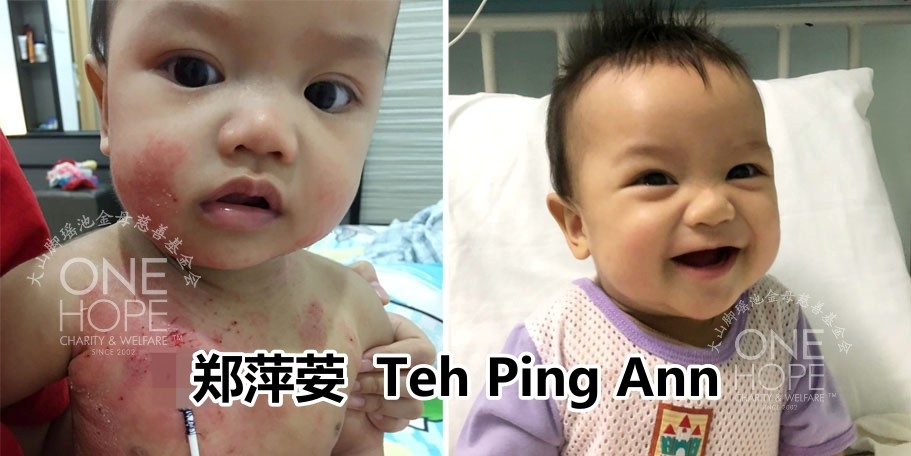 This is a Christmas gift that carries the love of a father. We hope also to gather the power of love from all well-wishers to create hope and miracle of life!

A nine-month-old baby girl was diagnosed with a rare genetic disease after she was born. In order to allow this “special baby” to continue survive and be given a chance to grow up, the father is willing to donate his bone marrow but they need to urgently raise a huge sum of RM700,000 for surgery.

Bone marrow transplantation is the only treatment plan that can provide a chance for the nine-month-old baby girl to survive. However, the family cannot afford the huge sum of medical fees. They hope that the public can join them in saving their daughter.

Since baby girl Teh Ping Ann from Bukit Mertajam was born, her parents have been to and from the hospital to seek treatment plans to save their daughter. As the case of the baby Ping Ann is a rare genetic disease for newborn, the Penang Hospital and University of Malaya Medical Centre studied more than 20 similar cases around the world before the hospitals came out with a solution of bone marrow transplantation to cure the baby girl. Therefore, the baby girl needs to be referred to the National University Hospital in Singapore for bone marrow transplantation to continue her life.

Baby Ping Ann was born on March 2, 2021, with bruises all over her body. After thorough examination and tracking of the family’s genetic history, the doctor found out that the baby girl’s brother also had this rare symptom at birth and died when he was just five months old.

And now, the baby girl has the rare symptom. The oncologist at Penang Hospital decided to send the genetic samples of the parents and the baby girl to the United States for testing. The result showed that the baby’s mother had a genetic error (Pathogenic for gen SLFN14 c.652A>G). As a child inherits 50% of the mother’s gene, so the baby girl has a genetic defect.

The doctor told that the baby might die any time die due to rupture of blood vessels. Her bone marrow can’t produce platelets to stop the bleeding. She might experience bruises, and if the condition is severe, she might even die.

【The bone marrows of the father and daughter are matched. The father can donate his bone marrow to his daughter but the huge sum of treatment costs made the family worry】

The 37-year-old father Teh Ghee Lim said that the National University Hospital in Singapore accepted the referral from Malaysia’s government hospital, and it’s willing to treat the child after understanding the overall condition. The bone marrow of his wife was is not suitable, but his bone marrow matches with his daughter and meet the donation requirements. It is a pleasant surprise news, but thinking about the major surgery that needs six months of treatment and observation in Singapore, the huge sum of treatment fees and expenses made the family worry.

Ghee Lim and his 30-year-old Indonesian wife Zen Meilani got married after they met at the factory where they worked. His wife was a quality checker before marriage and became a full-time homemaker after they have their own child. Ghee Lim is an electronic engineer earning RM6,800 a month, but he spent all his savings on his daughter’s treatment locally. And now, the estimated living expenses is about RM64,000. They can afford the amount by borrowing from their relatives and friends. However, the child needs S$219,000 (equivalent to RM700,000) for surgery and the parents are unable to afford the amount of money, hence, they seek urgent help from One Hope Charity, hoping that the public can lend them a helping hand.

【The parents named the baby girl Ping Ann, hoping that she can grow up safely and healthily】

The parents hope for a miracle in their daughter’s life, so they named her Ping Ann, with the homophone of “Ping An” (safe), hoping that she would be safe and grow up healthily.