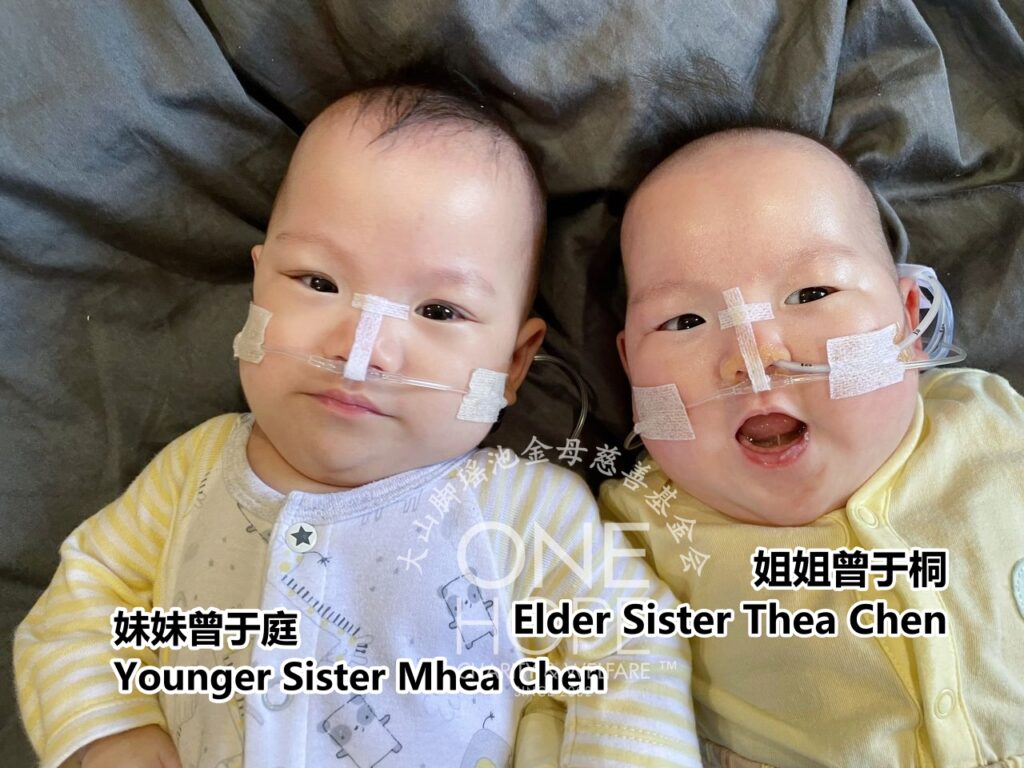 The twin sisters Thea Chen and Mhea Chen were born before full term. The younger sister was allowed to discharged after observation, but the elder sister has been hospitalised for eight months due to heart problem. The huge medical expenses left their parents devastated so they were forced to seek help for the second time as they are still short of RM40,000 to pay for their daughter’s medical expenses. They also hope that their daughter can be discharged from the hospital safety to be reunited with her younger sister.

At present, the corrected age for the sisters is five months old. Elder sister Thea is still depending on catheter to feed and breathing aid to breathe. Interactions have been lacking as she has been in the hospital for too long, so her response is slow. The parents are worried about the growth of their daughter, and they also worried that the catheter may chocked the baby. The parents are stressful due to the health condition of their daughter, and at the same time coping hard with the financial pressures.

【Welcoming a pair of twins was supposed to be a joyful occasion but it has turned into double worries. The parents’ greatest wish is that their daughters can grow up safely and healthily, but this can only be achieved with extraordinary patience and perseverance】

The mother of Thea and Mhea was found to have suffered from placental hydrops when she was 24 weeks pregnant. In order to save the mother and the twins, the doctor performed an emergency caesarean section. The sisters were born on 18 November last year, the elder sister Thea weighed 800 grams and Thea was only 600 grams.

Not only were born prematurely, the two girls also had holes in their hearts. Fortunately, the hole in Mhea’s heart could close on its own, and she was in stable condition. After hospitalisation for five months, she was finally discharged on 30 April this year. The hole in Thea’s heart was larger, so she has already stayed in the hospital for eight months. As Thea has been staying in an incubator so she did not have any interaction and contact with others. Her development and responds are slow. Therefore, the doctor decided to discharge her after a check and confirmed that her condition was stable, with the hope that she could have more interactions with her family.

It was not something easy to wait until the day when the daughter was allowed to be discharged, but the huge medical expenses caught the parents off guard. One Hope Charity launched a fundraising in June this year to help the couple in raising RM80,000. However, Thea was still in the hospital at that time, and the duration of hospitalisation and her condition were uncertain then. The parents thought that they could afford the remaining medical expenses so they rejected the suggestion to raise the extra expenses.

But now, the medical fee has gone beyond the parents’ budget, and they have already exhausted all their savings, so they have no choice but to ask One Hope Charity for the second time to raise the remaining RM40,000.

Their 38-year-old father Chen Chin Kit was an accountant before the pandemic, earning RM5,000 a month. However, his job was affected due to the pandemic, so he changed his career to work as a factory supervisor, with a monthly salary of RM3,500. Their 33-year-old mother is a bank telemarketer, but she has temporarily applied for unpaid leave since January to take care of her premature babies. The couple have another three-year-old daughter, who is temporarily taken care of by her grandmother.

After reviewing the case, One Hope Charity decided to assist the couple in raising the RM40,000. The family agreed to fully authorise One Hope Charity to take charge of the fundraising and collect the donations from the well-wishers on their behalf.