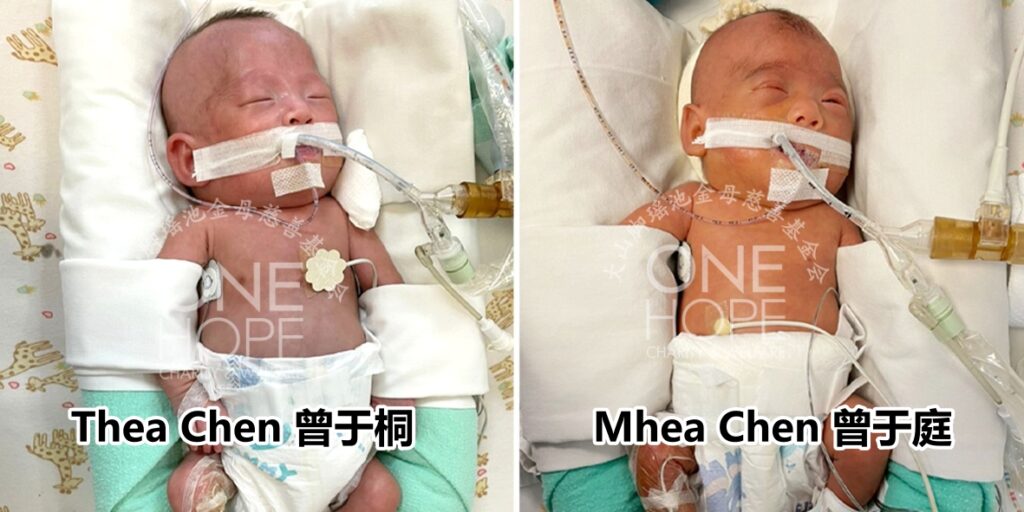 A couple was excited to welcome the arrival of their twin babies. However, the doctor discovered that the mother suffered from placental hydrops when she was 24 weeks pregnant, so the doctor performed an emergency caesarean section, otherwise, not only the lives of the twins would be at stake, but it would also threaten the life of their pregnant mother.

The twins were born in November last year. At that time, the elder sister Thea Chen weighed 800 grams, while the younger sister Mhea Chen was only 600 grams. Looking at their sizes, the parents were very worried. The babies’ conditions were unstable and needed to stay in the incubators for at least four months. The helpless parents were also worried about the huge medical expenses.

The two babies were born prematurely. When the doctor conducted checks on them, they were found to have holes in their hearts, so they were rushed to the intensive care unit and were placed in the incubators for treatment. They are currently depending on oxygen support to survive.

Now, their corrected age is three months old. The younger sister Mhea was fortunate enough as the hole in her heart has closed by itself, and her condition was stable. She was allowed to be discharged from the hospital on 30 April. The elder sister, Thea, has a larger hole in her heart, and she is still being treated at the intensive unit. She may need to undergo a heart repair surgery in the future. The doctor informed that Mhea can only be discharged after she learned how to suck and drink milk.

【The risk faced by premature babies is high, and the twin sisters were diagnosed with holes in the hearts so they need to be treated and observed in the incubators】

The twin sisters were born on 18 November and they were rushed immediately to the incubators for treatment. Premature babies face a lot of risks. Furthermore, the doctor informed that both the babies have holes in their hearts, and needed medication and observation. They also relied on oxygen aid to survive.

The mother, who was just gave birth to the babies were very worried about their conditions. She cried every day and she often went to the hospital to give moral supports to her babies. After four challenging months, the hole in Mhea’s heart has closed by its own, and she was allowed to discharge, but she still need to depend on oxygen support. Therefore, the parents rented an oxygen machine to ensure that their daughter has sufficient oxygen supply.

As for the elder sister Thea, the hole in her heart is larger and fail to close by its own, which is called atrial septal defect (ASD) in medical term. The hole in her heart is larger compared to the others, making her to suffer from breathing difficulty. She is fed on feeding tube and surviving on oxygen machine, so she is still put under observation in the intensive care unit until today.

The doctor informed that elder sister Thea needs to undergo a heart repair surgery in the future. As she is still too young and her weight is too light, it is not advisable for her to undergo the surgery at present. However, both the sisters are now weigh over 4kg.

Their 38-year-old father Chen Chin Kit was an accountant before the pandemic, earning RM5,000 a month. However, his job was affected due to the pandemic, so he changed his career to work as a factory supervisor, with a monthly salary of RM3,500. Their 33-year-old mother is a bank telemarketer, but she has temporarily applied for unpaid leave since January to take care of her premature babies. The couple have another three-year-old daughter, who is temporarily taken care of by her grandmother.