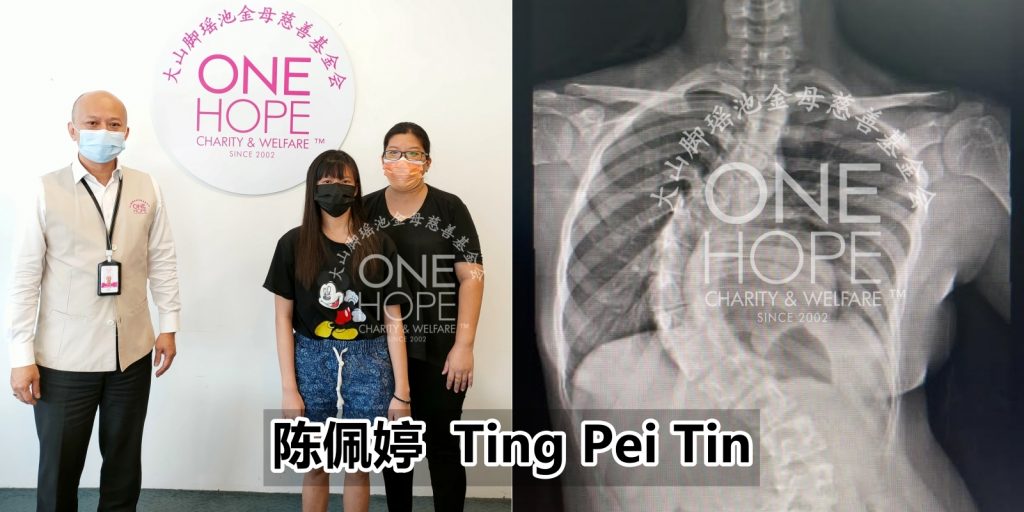 A 16-year-old girl coming from a single-parent family was diagnosed with scoliosis. The mother was blaming herself for neglecting her daughter because her grandfather has cancer and she has been taking care of him around the clock, which led to her daughter suffering from a curve up to 85 degrees. Her unusual appearance not only makes her feel inferior, but has also heavily affected her life. The mother urged the public to help her daughter to donate RM40,000 to help her daughter get a surgery.

In June last year, Ting Pei Tin, 16, from Kuala Lumpur complained to her mother that she was feeling chest and back pain. At that time, the mother did not pay too much attention and thought that it was just her habit of prolonged use of her smartphone.

It was until October last year, Ting’s grandfather was diagnosed with cancer. The mother had to take care of her grandfather, hence she moved to the grandfather’s and also brought Pei Ting for medical checkup.

Because of the grandfather’s condition, she had to spend more time with him going in and out of hospital. With the nationwide Movement Control Order, and the mother could not cross the district border, her daughter’s medical report has been delayed indefinitely.

In January this year, her grandfather passed away. When the mother contacted the hospital to collect her daughter’s medical report. However, the hospital did not record her report.

Ever since her daughter had been complaining about her back pain, the mother brought her to a specialist hospital for further checkup. After the doctor had measured the curve of her spine, her mother was broken to tears because she did not know that her scoliosis was that severe.

Pei Tin’s spine is curved up to 85 degrees and she needs to undergo surgery. Her shoulders are not on the same height, her right shoulder blades are protruding and her pelvis is tilted, which affected her cardiopulmonary function. In addition to her health problems, her medical condition has brought her psychological pain.

“I am not a good mother. Why had I not taken my daughter’s word seriously? Here I thought that she was spending too much time on her phone but deep down, she’s in pain everyday.”

Pei Ting’s condition could not be delayed any longer, but the operation fee costs up to RM40,000, which left the mother feeling helpless. She was remorseful, but continued to seek aid for her daughter’s medical treatment, hence she approached One Hope charity for help.

Chin Hue Ing, 44, used to work at a school canteen, but due to MCO and the indefinite closure of schools, her income has become unstable, so she turned into selling frozen food online, but her income is not above RM1,000.

Ever since her divorce 7 years ago, she has been single-handedly taking care of four daughters. The eldest daughter is 23 and married, her second eldest is 20 and the youngest is 11.