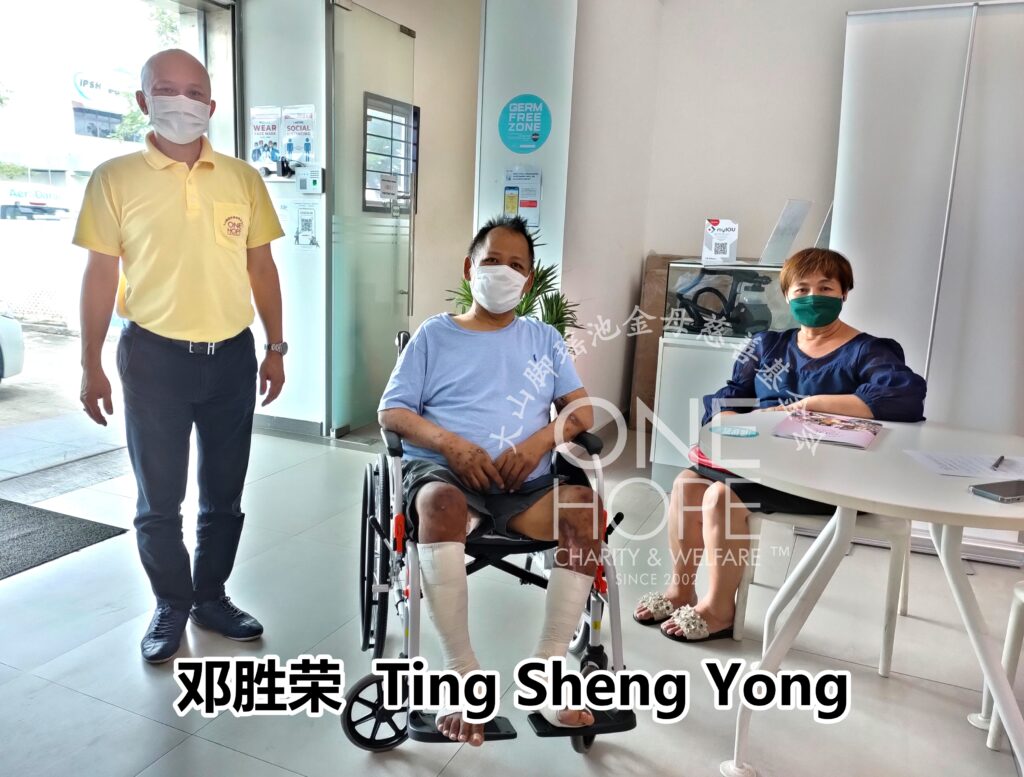 “Humans need to survive. Since I have encountered this problem, I will face it and continue to stay positive!”

A Chinese man who suffers from kidney disease also diagnosed with a rare vascular disease – the Calciphylaxis, which leads to multiple seriously infected wounds on his body. He needs to undergo 10 sessions of Therapeutic Apheresis (TA) but he is still short of RM30,000 treatment fee. He hopes that the public can help him to reduce his burden and pain.

Wounds that gradually grow from small to large can be found on his body. The wounds will also turn black and hard. After receiving treatment, similar wounds will still appear in the other parts of his body and he feels extremely painful when he cleans the wound.

44-year-old Ting Sheng Yong from Kuala Lumpur was admitted to the hospital six years ago due to breathing difficulty. The doctor diagnosed him with kidney failure and he has to undergo dialysis for the rest of his life. Since then, he started his days of dialysis and the cost was borne by the social security organisation (SOCSO).

Since March last year, several wounds started to appear on Sheng Yong’s feet. The wounds started from small black spots and then began to ulcerate, and later turned black. He was admitted to the hospital for further examination and the doctor diagnosed him with Calciphylaxis, a type of rare vascular disease.

Sheng Yong was diagnosed with heart disease after he was diagnosed with kidney failure. In 2018, he had to undergo the angioplasty due to heart problem and the surgical fee then was paid by Sheng Yong. In May last year, he had irregular heart rhythms and was admitted again for another heart surgery. He also paid for his own medical expenses at that time.

【He’s not only enduring the pain of dialysis, but also experiencing severe pain from the wounds caused by Calciphylaxis】

Suffering from vascular disease Calciphylaxis, the wounds on his body have been repeatedly festering, ulcerating and pus, blackening, and softening. Not only must Sheng Yong endure the pain caused by kidney dialysis, but the wounds formed due to Calciphylaxis make him suffer from severe pain.

Due to blockage of Sheng Yong’s blood vessels, he needs to undergo a Therapeutic Apheresis (TA). The technology is mainly to selectively removes abnormal cells or substances in the blood that are associated with or causative of certain disease states (similar to dialysis), but the treatment is expensive.

When asked about how he went through all the hardship in life, Sheng Yong said: “Humans need to survive. Since I have encountered this problem, I will face it and continue to stay positive.” Those words showed his perseverance in facing the life challenges.

Sheng Yong was a photographer before he started dialysis. He used to earn about RM3,000 a month (his income was unstable). His parents had passed away and he has two older sisters and two younger sisters. He is now staying with his younger sister, where she takes care of his daily life and meals. His treatment fee is RM35,000 but he can only afford RM5,000.

After reviewing the case, One Hope Charity decided to help Sheng Yong with the shortfall of RM30,000 treatment fee. His family agreed to authorise One Hope Charity to take charge of the fundraising and collect donations from the well-wishers on their behalf.

Calciphylaxis is a serious and life-threatening vascular disease. Early detection of this disease is difficult as the recognition rate is low. It has a poor prognosis with one-year mortality rates between 45% and 80%. It is a complex disorder with a multifactorial etiology. Medical calcification and intimal fibrosis of the cutaneous arterioles combined with thrombotic occlusion leading to ischemic skin necrosis is seen in Calciphylaxis. It usually accompanied by severe pain in the lesion. The disease is more common in patients with end-stage kidney disease, so it is also called Calcific Uremic Arteriolopathy (CUA).