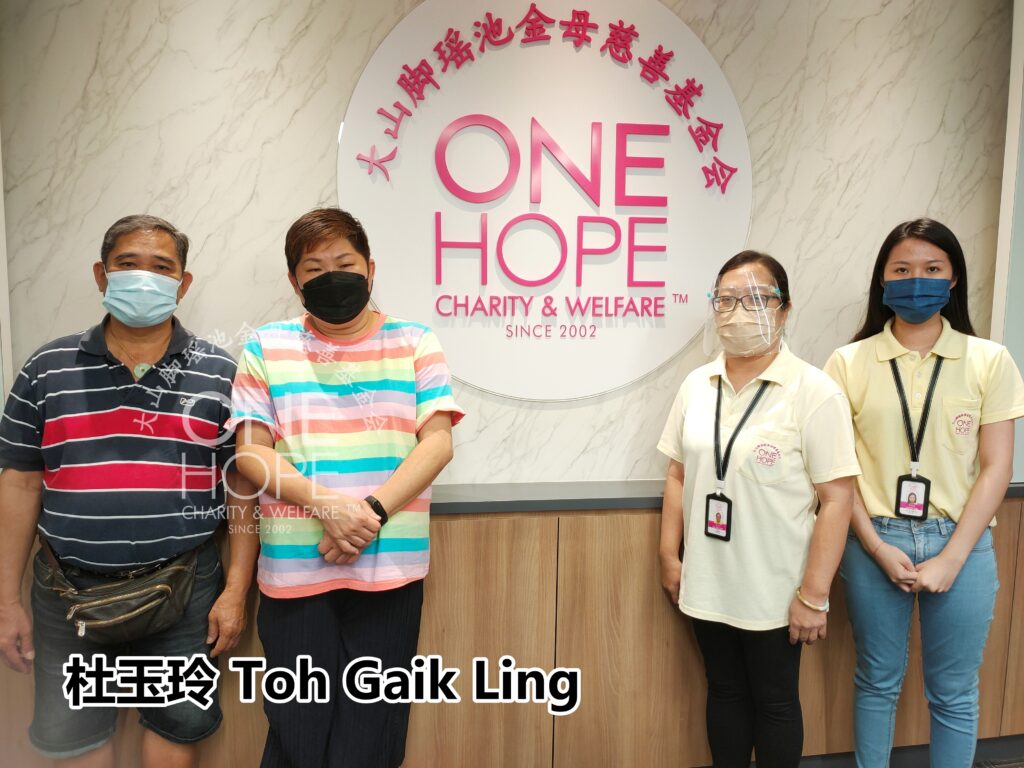 “If you give me a chance to live, I am willing to use the rest of my life to give back to the society and help those in need.”

53-year-old Toh Gaik Ling runs a fried rice noodles stall with her 58-year-old husband. During her spare time, she will help in the Buddhist temple to cook and outgiving to the homeless people and poor families to satisfy their hunger. Recently, due to an illness, chest pains and breathlessness make her can't even longer climb up the stairs to her condo which she stays in. She now only temporarily stay in the temple. In the meantime, she still continues to help others with cooking.

Three of her heart vessels are severely blocked, one of which has been blocked by 80%, and her condition is critical and requires a surgery fee of RM47,000. She hopes the public can help her pass thru these difficulties so that she can continue to help the other needies.

Toh Gaik Ling suffered from hereditary diabetes since she was 12. All these years, she has been relying on insulin injections to control her blood sugar level.

Three years ago, she experienced chest pain and diaphoresis, but she mistakenly thought that it was due to acid reflux. She tried to take probiotics, but the problem persisted. She later went to Penang Hospital for medical treatment in August.

In early October this year, she had severe angina to the point that she could not walk. She also had burning throat, headache, numbness of hands and feet and shortness of breath. An examination revealed that three of her heart vessels were 80%, 70% and 60% blocked. Her condition is critical and needs to be admitted. She also in urgent need of RM47,000 for a life-saving surgery.

【Before she was sick, she often cooked for the homeless and poor families in a Buddhist temple. And now, she is begging the public to give her a chance to survive, so that she can continue to help the underprivileged in the society】

Gaik Ling lives in Butterworth and she sold Char Hor Fun at the Seberang Jaya Market with her husband. Due to pandemic and her health condition, Gaik Ling was unable to operate her stall for several months. The couple is now relying on savings and aids from their fellow hawkers to support their living expenses.

In October this year, she had angina. Her face also turned pale and she also had diaphoresis. Her brother felt something amiss and suggested her to go for examination at Penang Hospital. However, it was expected to take two months for the report to be revealed. Unexpectedly, she experienced six rounds of angina at around 11pm on the next day. She was sent to the emergency department of a specialist hospital. The doctor took X-rays and conducted blood tests for her. Preliminary examination showed that she has heart problem, and she was given oral medication to relieve her chest pain.

However, oral medication can just relieve her pain temporarily. As she often experienced chest pain, she was later transferred to a specialist hospital for detailed examination, and it was confirmed that three of her blood vessels in her heart were blocked. Her condition is serious and she is worried that her condition will worsen. The doctor recommended her to undergo a heart surgery as soon as possible to avoid the blockage to be worsened, which will threaten her life.

Gaik Ling and her 58-year-old husband Choong Kwai Lin were hawkers selling Char Hor Fun. They used to sell in Apollo Market in Butterworth for over a decade, before moving to Seberang Jaya Market. They operated their business there for about four years until Gaik Ling suffered from osteophytes and their business was greatly affected by the pandemic, where they decided to cease their business.

Now, Gaik Ling will feel very tired after walking a few steps. She is unable to climb up the stairs to her flat in Butterworth. Therefore, she is temporarily lives in a Buddhist temple on the Penang Island. She and her husband have a 31-year-old son, who is married and has his own family.

After reviewing the case, One Hope Charity decided to assist Gaik Ling in raising the RM47,000 surgical fee she needed. Her family members agreed to authorise One Hope Charity to take charge of the fundraising and collect donations from the well-wishers on their behalf.