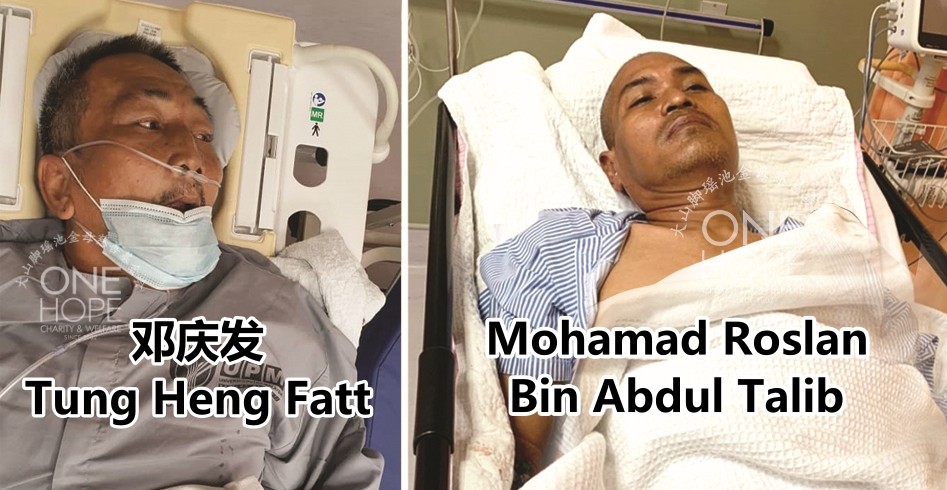 Stroke rescuing can't be delayed. A 46-year-old factory bus driver and a 57-year-old bachelor are diagnosed with a stroke and need to be operated on during the prime time, otherwise, they will endanger their lives or become paralyzed for life.

The 57-year-old bachelor started to walk unsteadily. The next day, he was found unable to lift one of his hands. In the afternoon, he began to experience slurred speech and confusion. He was sent to the hospital for an emergency and found to have a stroke.

Both of them need to undergo Mechanical Thrombectomy to save their lives. A total of RM70,000 are required for the operation. The huge operation makes the family members who are unable to restrain the chickens helpless, even more at a loss and helpless.

【Case 1:Even if a bachelor is mentally disabled, he still supports himself by working with his hands】

Tung Heng Fatt, 57, started to walk unsteadily at night on the evening of December 28. He could not lift one hand the next day. After lunch, he was found to be unable to speak and was unconscious.

He lives in Puchong, Selangor, and his family originally wanted to take him to Serdang Hospital, but the ambulance suggested that the patient should be sent directly to HUPM because the Hospital has a professional stroke medical team for direct treatment.

Tung Heng Fatt is low IQ, but he does not have a certificate of a disabled person. Despite this, over the past few decades, he has worked to support himself. He used to hold coffee in coffee shops, wash dishes, work as a casual worker in the construction industry, and rely on employers to provide dormitories to earn money to support himself.

【Case 2:The 46-year-old factory bus driver suffered a sudden brain stroke. Fortunately, his colleagues who shared the car at the time discovered that something was wrong, not only controlled the steering wheel vigilantly, but also called for an ambulance for him】

A 46-year-old factory bus driver suddenly felt unwell while ferrying factory workers. His colleague, who was in the vehicle, discovered that something was not right and helped him to control the steering wheel immediately so no accident happened on that day. After he was sent to the hospital, the doctor confirmed that he had a stroke. Thrombolysis was not effective for him, and he is in urgent need of RM35,000 for an emergency mechanical thrombectomy.

At around 2pm on the Christmas Eve, Mohamad Roslan Bin Abdul Talib from Batu Gajah in Perak suffered a sudden stroke. Fortunately, a colleague in the same vehicle then discovered that something was wrong. The colleague not only alertly controlled the steering wheel, but also called an ambulance immediately.

Mohamad Roslan was sent to Ipoh Hospital. The doctor confirmed that he had a stroke. As stroke patients need to clear the blood clot that caused the cerebrovascular block within the golden window, the doctor at Ipoh Hospital decided to first use thrombolysis as the treatment plan, hoping that alteplase could help in dissolving the blood clot.

This treatment plan did not have significant results in Mohamad Roslan. Therefore, the doctor decided to send him to Universiti Putra Malaysia Teaching Hospital (HPUPM) – a hospital in Selangor with mechanical thrombectomy technology to minimise the damage to the patient’s brain cells.

Mohamad Roslan and his ex-wife have a son, their only son Mohamad Yusri Hakim Bin Mohamad Roslan is a university student. He learned that his father had a stroke and urgently needs a mechanical thrombectomy. However, the surgical fee is high and he can’t afford it as he is still a student. Hence, he approached One Hope Charity for help.

Stroke is considered urgent case. The patient needs to undergo emergency mechanical thrombectomy to save his life, otherwise, he might be paralysed or even lost his life. This is a race against time. A slight moment of delay will affect the patient’s mobility and mental ability, but if a surgery is performed within the golden window, the chance of recovery for the patient will be greatly improved.

The 46-year-old patient, Mohamad Roslan Bin Abdul Talib is a factory bus driver with a monthly salary of about RM1,300. His 22-year-old only son is still studying at the university and is unable to afford the Rm35,000 medical fee.

After reviewing the case, One Hope Charity decided to help them in raising the RM70,000 in medical expenses. The family agreed to authorise One Hope Charity to take charge of the fundraising and collect donations from the well-wishers on their behalf.