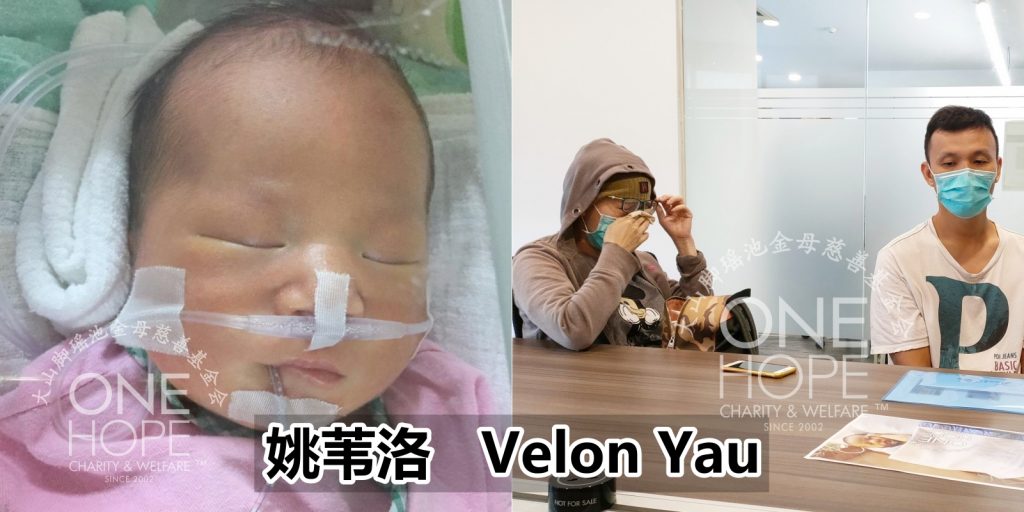 This is an emergency. The baby boy is only 12 days old and he’s struggling for his life. Can you please save him?

The mother gave birth to a boy named Velon Yau, but his lungs had bacterial infection. During his stage to taking in antibiotics, the doctor noticed severe and complicated heart defects on the baby, which caused him to receive a lack of oxygen. The situation could not have any more delay, and an emergency surgery must be done to save his life.

These past few days, the father has been going around seeking medical treatment, transferring from one hospital to another with his child. The mother is still in confinement after childbirth, but she is still constantly worrying about her newborn child’s wellbeing. The baby needs RM40,000 for the surgery, hence the parents urged the public to save their child.

【With low oxygen supply to the heart, the baby boy had to rely on drugs to maintain and needs to undergo surgery】

On May 6, the mother gave birth to Velon Yau in a private gynecology centre. The baby’s lungs were infected with bacteria, so he had to take antibiotics. Suddenly, on one evening, the boy was running short of breath, and was immediately transferred to a general hospital in Muar for further examination.

With his condition becoming worse, he was transferred to a hospital in Johor on the third day of birth. Medical examination confirmed that he has a hole in his heart, a rare heart aorta rupture affected the oxygen supply on his lower body, and his heart valve could not be closed.

The baby boy has been staying in the ICU ward. The hospital has been supplying medication and blood to circulate in his lower body. However, the medications could cause his organs to deteriorate. The only way is to have surgery to save his life.

【The mother could get to see her newborn, but could not get to touch or hug him. The baby has been transferring from hospital to hospital】

The hospital has transferred the newborn to a specialist hospital for an emergency heart surgery. On May 16, the baby, along with his parents, went from Johor to Kuala Lumpur specialist hospital via an ambulance. Right now, the baby boy relies on meds and breathing aid to survive, but a series of medical tests showed that his condition became worse.

The father Yau Ten Yen, 44, used to work as a mechanical engineer in Johor, but due to the pandemic and meager pay, he went to work as an engineer in Singapore in December last year. His monthly income is SGD 4,540 (around RM13,983.20), but he was just recently working and with no yearly leave, he was forced to take unpaid leave to be with his wife and children. The mother, Sow Lee Chean, 40, is a housewife. The family also has two kids, aged 13 and 10.

The newborn baby needed to undergo a complicated surgery and treatment, which costs a total of RM100,000. The father can bear RM60,000, but hoped that the public could help fund the remaining RM40,000.

After conducted the case review, the One Hope Charity has decided to launch a fundraiser to raise RM40,000 to save the baby boy’s life.