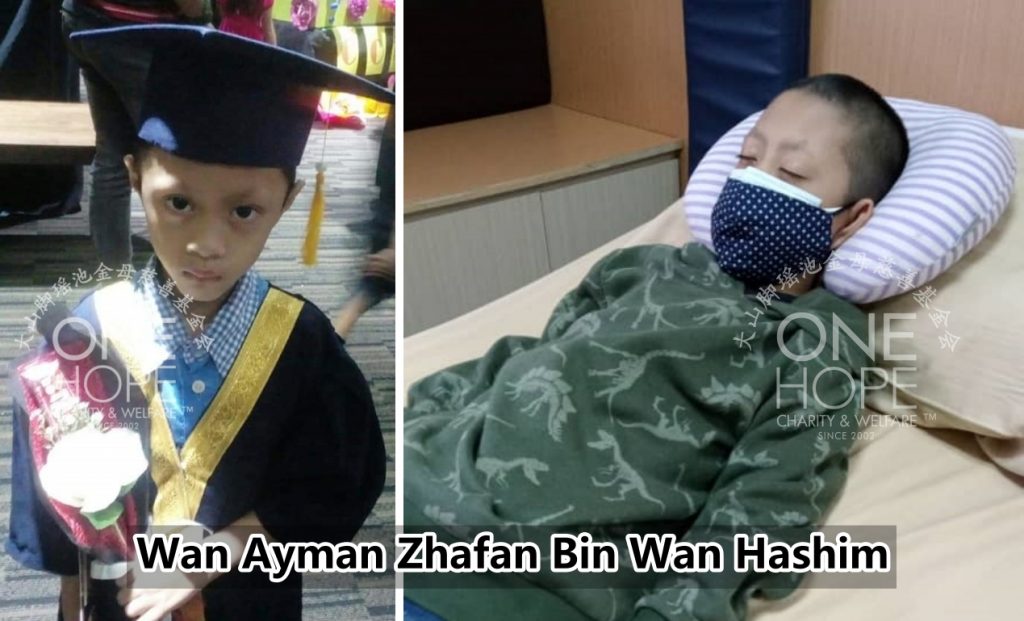 Three months after his birth, the boy was diagnosed with heart defects, but his condition then did not require a surgery. However, during a recent follow-up visit, he was told that his condition had deteriorated rapidly, and he needed to fly in from East Malaysia to National Heart Institute (IJN) in West Malaysia for surgery. His parents are helpless with the sudden news, and they hope that the public’s kind donation could save their son.

Nine-year-old Wan Ayman Zhafan Bin Wan Hashim from Sarawak was diagnosed with congenital heart disease by a doctor when he was just three months old. At that time, the doctor did not provide him with a specific treatment plan; or prescribed him with any medication to control his condition; or required him to undergo any surgery.

His mother Nur Haslinda Abdullah said that her son did not show any symptoms as he was growing up and only required to go for regular follow-up visits. When her son started his primary education, she specifically informed the school administrators about her son’s heart problem and reminded them that her son was not suitable for intense exercises or sports but could take part in some light activities.

“My son was alright for the past years. Although he often catches a cold, but it was always a mild cold.”

Until recently when Wan Ayman Zhafan returned for his routine follow-up visit, the doctor found out that his condition had taken a turn for the worse and he must undergo a heart surgery as soon as possible, otherwise his life would be at risk.

A cardiologist confirmed that he is suffering from atrial septal defect (ASD). The doctor in Sarawak referred him to IJN in Kuala Lumpur for the heart surgery.

His 45-year-old father Wan Hashim is a warehouse security guard with a basic salary of about RM1,200 a month. Adding his monthly allowance of RM300, he earns about RM1,500 monthly. His 42-year-old mother Nur Haslinda Abdullah is a housewife.

They have five children – 22-year-old eldest son, who is married with a son and works as a security guard, 20-year-old daughter, who is married and unemployed, 11-year-old son, 10-year-old son, and Wan Ayman Zhafan is the youngest in their family. As their three younger children are still schooling, they could not afford the huge amount of surgical fee. Hence, they came forward to seek help from One Hope Charity.

After reviewing the case, One Hope Charity decided to assist him in raising RM36,000 surgical fee so that the boy could undergo his surgery as soon as possible.