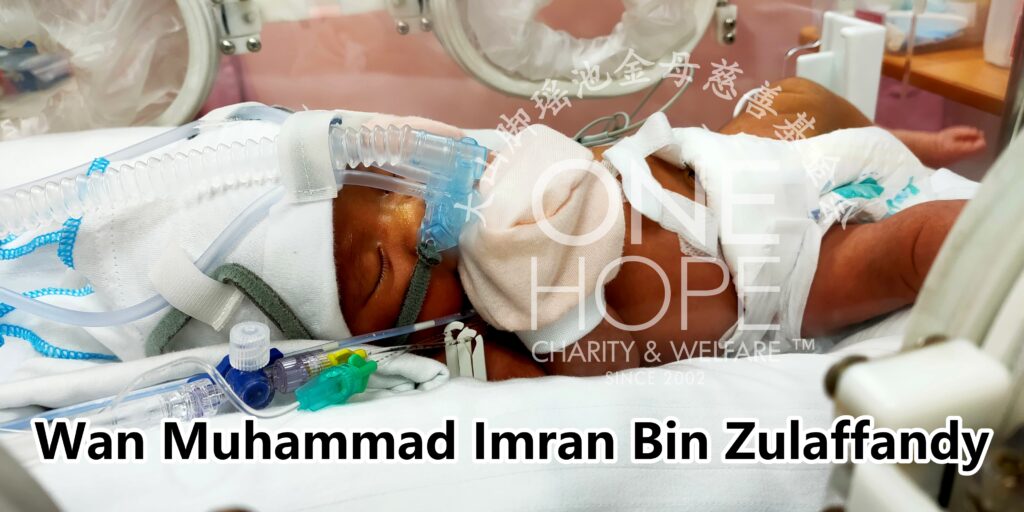 The premature baby boy’s umbilical cord was looped around his neck, causing him to suffer from hypoxia and cyanosis. The mother pleaded the doctor to save her child first. And now, the child’s life was successfully saved, but the mother is worried about the huge medical expenses.

The fetal heartbeat was discovered slow when the mother was 36 weeks pregnant. The doctor decided to perform an emergency caesarean section, but it was discovered that the fetal umbilical cord was looped around his neck, causing him to suffer from hypoxia and cyanosis. The private obstetrics and gynaecology clinic did not have oxygen machine, but the baby was in critical condition, so he was transferred immediately to the closest specialist hospital. The baby was saved after emergency treatment, but he needs to be treated in an incubator for two weeks.

The two-week treatment is expected to cost RM50,000. The parents borrowed money from their friends and relatives, and they managed to pay RM10,000 deposit to the hospital. However, they can’t afford the remaining RM40,000, hence, they approached One Hope Charity for help.

【The baby’s umbilical cord was wrapped around his neck, causing hypoxia and cyanosis, and his life was in danger. After being urgently transferred to a specialist hospital for rescue, his life was saved, but he needed to undergo two weeks of treatment】

Baby boy Wan Muhammad Imran Bin Zulaffandy from Ulu Kinta in Perak seemed to be normal during his mother’s pregnancy, and the estimated due date was supposed to be on 10 July. However, when the mother was 36 weeks pregnant, the doctor discovered that the fetus had a slow heartbeat, so the doctor decided to perform an emergency caesarean section on 14 June.

The newborn boy was diagnosed with prematurity with respiratory distress syndrome after birth due to the looping of umbilical cord around his neck which caused hypoxia and cyanosis. As the private obstetrics and gynaecology clinic did not have enough equipment to provide oxygen aid, and the baby boy’s condition was critical, the doctor suggested to transfer him to the nearest specialist hospital for rescue.

Although his life was saved but his condition was still unstable. Some of his internal organs were not fully developed so he needed treatment in the incubator for two weeks.

His 38-year-old father Zulaffandy Bin Mohd Zulkefli was a supplier of dormitory supplies earlier, but his sales was not good. Currently, he repairs sofas outside of his house, earning between RM2,000 and RM2,5000 a month. His 41-year-old mother Nik Zaihasra Bt Abdullah worked at a legal firm earlier, but due to gallstone surgery last year and her pregnancy, as well as her tested positive for Covid-19 early this year, she decided to quit her job to prepare for her delivery. She is unemployed since April. During this  period, the family almost exhausted all their savings to pay for their living expenses, and they are unable to pay for the shortfall of the medical expenses.

The couple have four daughters, aged 14, 13, 12 and five. They were looking forward to having a boy, but unexpectedly, he had an emergency during premature delivery.

After reviewing the case, One Hope Charity decided to assist in raising the shortfall of RM40,000. The family agreed to fully authorise One Hope Charity to take charge of the fundraising and collect the donations from the well-wishers on their behalf.