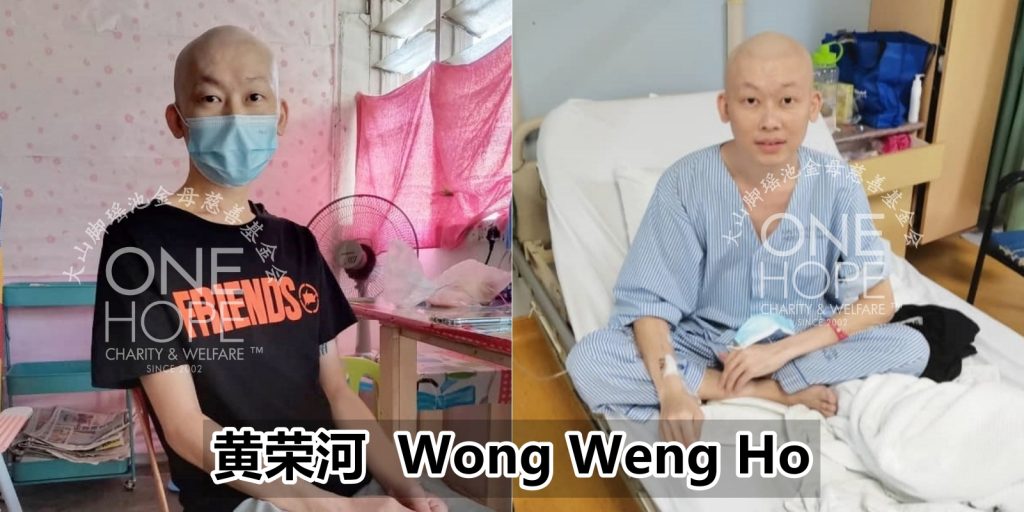 Coming from a poor family, it was not an easy task to step into the working society. He carried his hopes and efforts to try to make a better change for him and his family. Yet, fate turned against the youth as he was diagnosed with leukemia and to pay a hefty price for chemotherapy and bone marrow transplant.

34-year-old Wong Weng Ho from Kuala Lumpur was diagnosed with leukemia in 2019. At first, he found it difficult to accept the news, but now, not even medication could control his medical condition. He needs to undergo chemotherapy and bone marrow transplant, but also needs RM180,000 to pay for it. The hardworking youth hopes that the public can lend him a hand, allowing him to successfully undergo the needed treatment and give him a second chance in life.

In May 2019, Wong noticed sebum swelling on his stomach. Hence, he went to the hospital for checkup and the doctor diagnosed him with leukemia. He was later transferred to Ampang hospital.

After further medical examination by a specialist doctor, he started to take medications for chemotherapy. In October last year, after one and a half years of treatment, he went back to the hospital after his tooth gums were bleeding non-stop. The doctor found out that his condition became worse, to the point that only a bone marrow transplant can keep him alive.

According to Wong, he came from a poor family and growing up was not an easy task for him. He managed to harness his skills and worked as a repairman for air-conditioners. Slowly but surely, he improved his family’s lives with his bare hands, but did not expect the sudden turn of fate when he was diagnosed with leukemia.

“Ever since I knew I had leukemia, I was really upset at myself and kept asking... why me? But I must accept reality, hopefully I can get the bone marrow transplant and have another chance in life,” Wong said.

【A suitable bone marrow was found and the youth needed to undergo chemotherapy, hence he needs help with the expenses】

The bone marrow transplant and the overall chemotherapy session comes in a hefty cost, with a total of RM180,000. Wong and his family could not afford that, hence they approached One Hope Charity for help.

Wong also has three brothers, but their salary was only enough to feed their family. To make matters worse, the Movement Control Order has put them in a very tight spot.

After reviewing Wong’s case, the One Hope Charity agreed to help and launched a fundraiser to raise RM180,000 for his overall medical treatment fee. The family has agreed that all fundraising activities will be in charged by One Hope Charity, as well as to call for donations.