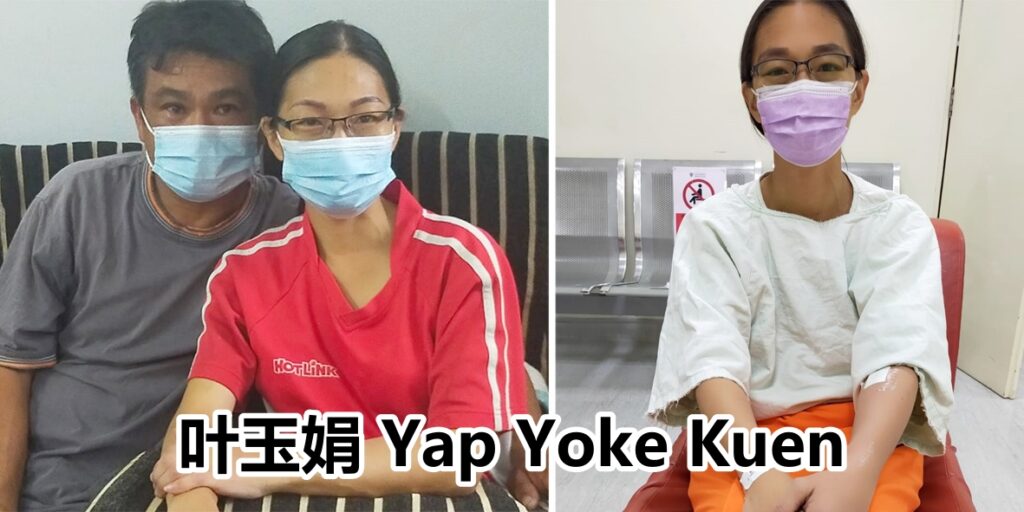 Their love is stronger than gold. A woman who suffers from kidney failure is in urgent need of kidney transplant. Her husband is more than willing to donate his kidney to the wife. His only hope is that the wife can survive to see their children growing up.

The two most important men in her life were willing to donate their kidney to her. However, her father, who is in his 70s, was confirmed not suitable to undergo the kidney transplantation. Yap Yoke Kuen’s 46-year-old husband did not want his wife to suffer the pain from dialysis and agreed to donate one of his kidneys to her but they are short of RM90,000 medical expenses.

41-year-old Yoke Kuen from Rawang, Selangor, suffers from systemic lupus erythematosus (SLE) . She has been relying on medicines to control her condition for the past 25 years, but her condition has caused her kidneys to fail, and she must undergo dialysis. The doctor suggested her to undergo kidney transplantation and her husband is willing to donate his kidney to save her.

This is not a movie scene but a real-life case. It is not an easy decision but they are willing to witness the miracle of love. The couple can only afford RM30,000 surgical fee and they are hoping that the public can help them with the remaining RM90,000.

【The husband is willing to donate his kidney to save his wife. She is so touched and pray hard that they can grow old together】

Yoke Kuen had fever and hair loss for no reason when she was 16. She was later diagnosed with SLE, but the doctor told her that her condition was not serious. She has been relying on medications to control her condition for the past 25 years; she worked and got married, just like the others.

She became pregnant unexpectedly in 2005. Yoke Kuen risked her life to give birth to her first son. Luckily, everything went normal. Five years later, her medical condition was stable, and she also prepared to get pregnant. In 2010, she gave birth to a baby girl, and the family of four living together happily.

In 2015, during a routine check-up, the doctor found out that she suffered from stage III kidney failure. She tried to use food and beverages to control her condition. At the beginning of the year, her kidney condition deteriorated and her kidney failure went into the final stage. The doctor suggested that a kidney transplantation operation needs to be carried out to ensure the quality of the life in the future. Otherwise, she will need to undergo dialysis to delay the deterioration of her kidneys.

At first, Yoke Kuen was quite hesitant to undergo the surgery due to the fee incurred and other reasons. After several sessions of explanations by the doctor and psychological preparation for the couple, they decided to accept the doctor’s recommendation about half a year later. They underwent various examinations and it was confirmed that the husband’s kidney was suitable to be transplanted.

Her 46-year-old husband Leong Hoi Kwang started to lose weight and quit smoking to ensure that the kidney he donated is a healthy and functionable organ for his wife. That was not an easy decision, but he demonstrated his steadfast love for his wife by action.

Hoi Kwang is a car repair workshop owner, earning about RM5,000 a month. His wife worked as a clerk in the same workshop, with a monthly salary of RM1,800. Both of them worked together until this year when Yoke Kuen started to experience some symptoms like nausea, dizziness, edema, among others, which forced her to quit the job. Since then, the financial burden of the family rests on the husband alone.

Knowing that her husband has to work hard for her and the family, Yoke Kuen wanted to stay strong and recover as soon as possible. She hopes that after the kidney transplantation, she can take care of her family, their 16-year-old son and 11-year-old daughter wholeheartedly to relive the burden of her husband.

After reviewing the case, One Hope Charity decided to help her. The family agreed to authorise One Hope Charity to take charge of the fundraising and collect donations from the well-wishers on their behalf.