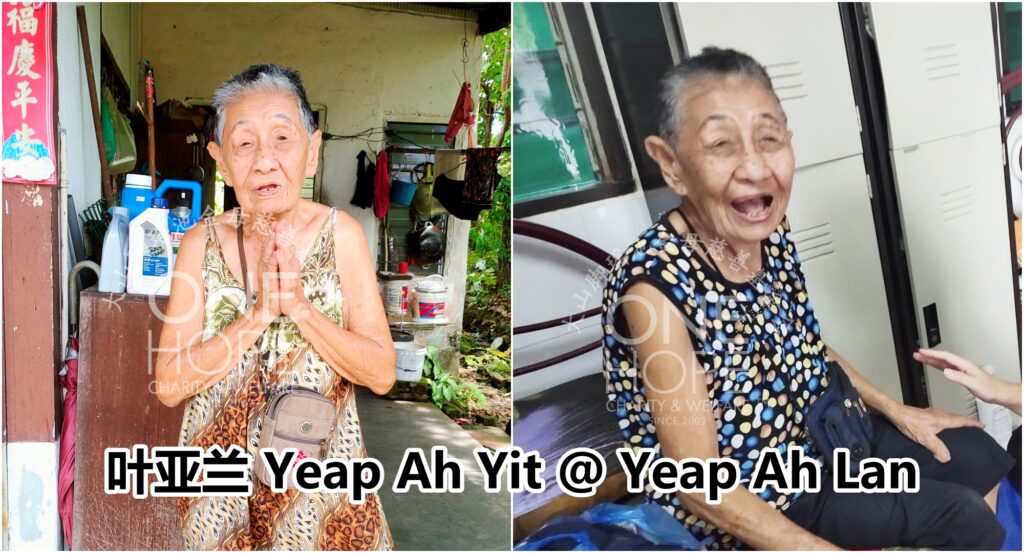 81-year-old Yeap Ah Lan, who has no children, lived alone for many years after the passing of her husband. She worked tirelessly to support herself; as she grew older, she moved to Taiping to live with her 75-year-old brother, who was living alone.

However, Aunty Yeap often felt dizzy, short of breath and fatigued in recent years. She did not want to burden her brother, so she started thinking about living in a nursing home. Hence, she approached One Hope Charity for help. After reviewing the case, One Hope Charity decided to help her by raising a symbolic RM36,000 to cover the nursing home expenses to get the care she needed until the last day of her life.

【The siblings depended on each other, but after realising that something was wrong with her body, Aunty Yeap slowly accepted that she was ageing. She waited for the last day of her life with an open heart as she conveyed her last wishes to her loved ones. Her only hope was that she can get proper care until this dismissal】

Ah Lan was born in Thailand during the Japanese War. She later returned to Malaya with her parents, who were railway workers. They settled down in Taiping. She is a Malaysian citizen and moved to Penang with her husband after getting married.

She had done a lot of labour before starting a business selling animal feed with her husband. The couple worked hard to maintain their family and had a stable life.

Unfortunately, her husband died of liver cancer in his 50s, and she ended her business. The couple had no children, so Aunty Yeap worked hard to earn a meagre income to support herself. Her last job was to help with funeral ceremonies at the crematorium, and she had previously worked in the funeral industry.

Seven years ago, she could no longer work due to health problems, so she moved to Aulong in Taiping, Perak, to live with her younger brother. She and her brother have different living habits, so she needed to cook, wash and care for herself. She relied on her savings and the assistance of her friends to live.

Recently, Aunty Yeap began to have more health issues, such as dizziness, shortness of breath, trembling hands, fatigue and blurred vision. She knew that she could no longer care for herself and did not want to be her brother’s burden, so she decided to move to a nursing home. Hence, she approached One Hope Charity for help.