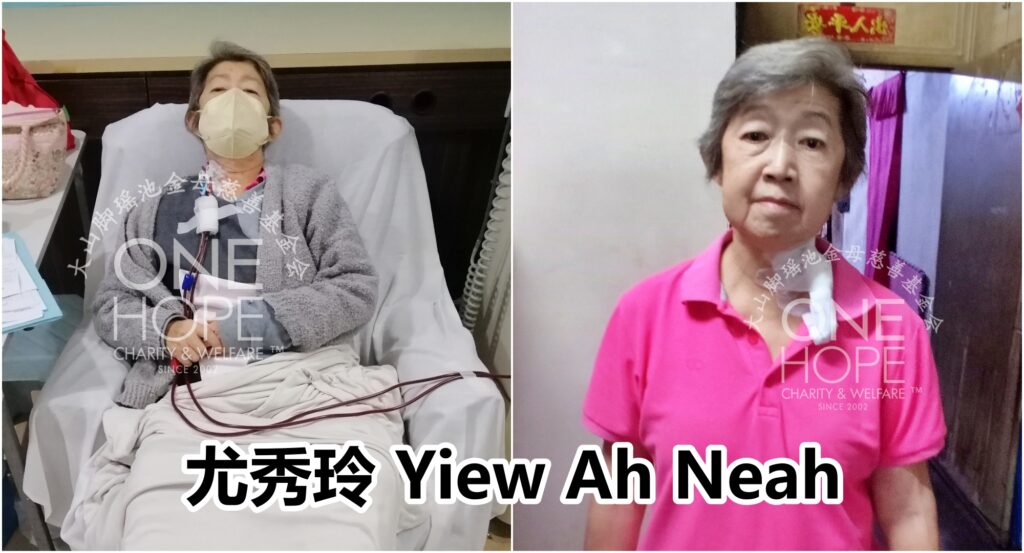 74-year-old Yiew Ah Neah from Bidor, Perak, discovered a lump on her inner thigh in 2019. After a detailed examination, she was diagnosed with a stage III lymphoma cancer. Her family had exhausted all their savings and they spent at least RM50,000 for her treatment. She finally recovered and discharged from the hospital. Unexpectedly, after less than a year later, Ah Neah was sent to the hospital due to nose block and blurred hearing, and the doctor told Ah Neah that she had a tumour in her throat. The diagnosis revealed that her lymphoma cancer relapsed, and she needs RM33,360 in medical expenses. Her children are unable to afford it, hence, they approached One Hope Charity for help.

【Yiew Ah Neah’s lymphoma cancer cells have spread to her kidneys, and she needs long-term dialysis. However, her children and grandchildren do not give up. Even her recovery rate is as low as 10%, they will still try their best to treat her】

Ah Neah is a single mother. After the passing of her husband, she raised her three children by herself. Although they were not well-to-do but she had already gone through the toughest stage. And now, the children have grown up, and it should be the time for her to enjoy her twilight years. Unfortunately, she was diagnosed with lymphoma cancer in 2019, and the cancer relapsed after she recovered.

Her family can no longer afford her chemotherapy costs, so they let Ah Neah continues with a cheaper treatment option, which is the monotherapy treatment to control her condition. Although it is cheaper, but it cost RM2,000 a month. Her children insisted to support her, and her condition improved after that.

In March this year, the doctor found out that Ah Neah’s creatinine level was high and suspected that she had a kidney problem. After a test following the kidney cells extraction, the report showed that the cancer cells had spread to her kidneys, and she needs to undergo long-term dialysis. If she doesn’t undergo dialysis, she will experience chill, backache, gastric and other symptoms, which made her suffers. Currently, she needs to undergo dialysis once a week, and her children will bear the cost of dialysis. Each dialysis cost RM300.

The doctor suggested her to get another chemotherapy injection and medication. If the treatment plan is successful, she will have a chance to get rid of dialysis. However, the treatment fee for six sessions cost RM33,360.

Ah Neah’s 42-year-old eldest son Chew Choon Hua, is a single father. He works as a construction contractor, but he declared bankrupt 10 years ago. He currently earns about RM5,000 a month, and his 25-year-old son has just started working. Her 41-year-old second daughter Chew Lay Khun is a full-time housewife, and her husband is a farmer. Her 38-year-old youngest daughter Chew Puen Zee is a single mother. She is currently working in a restaurant in Singapore and she has three children. Part of Ah Neah’s cost of living is borne by the youngest daughter.

The patient’s previous expenses for chemotherapy, monotherapy and dialysis were borne by her children, and they are unable to afford her treatment expenses anymore. However, they do not want to give up as long as there was a glimmer of hope, so they begged the public for help.

After reviewing the case, One Hope Charity decided to help Ah Neah in raising the medical expenses she needs. Her family agreed to fully authorise One Hope Charity to take charge of the fundraising and collect the donations from the well-wishers on their behalf.