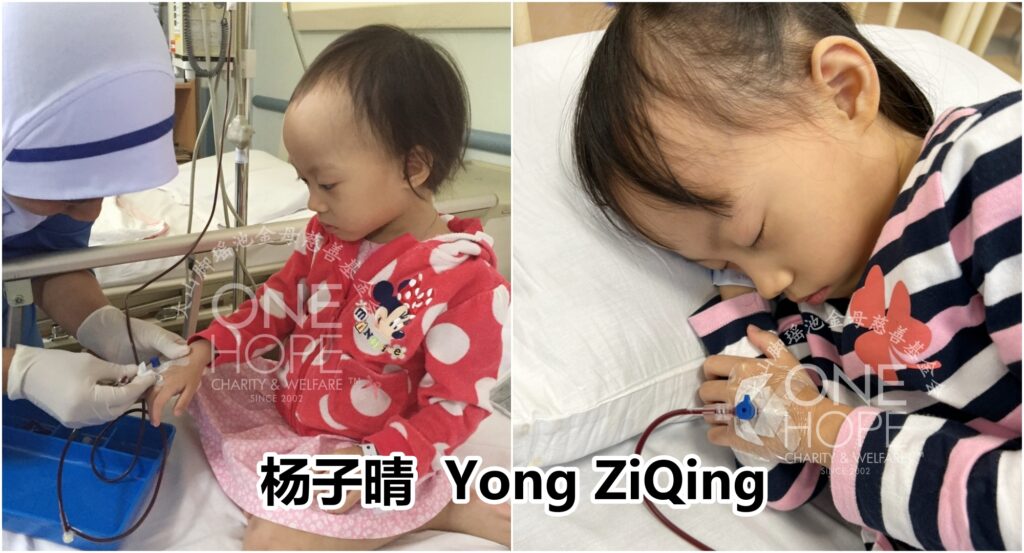 The 7-year-old Yong Ziqing shyly hides in her parents' arms when she sees a stranger. She loves playing with Barbie dolls. The coming new school year, she will enter the standard 1 of primary school, and she is full expectation to school to make more friends.

No one expected that Ziqing, who looks like an ordinary girl, is actually a patient of Pyruvate Kinase Deficiency (PKD).

Ziqing from Ipoh, Perak was born with a high jaundice, and the problem could not be solved even after phototherapy lamps. The hospital was forced to exchange blood for the child, and she was allow to discharged after hospitalized for nearly a month. Afterwards, the parents took Ziqing to the hospital for follow-up visits and found that the child's red blood cells were low and she looks pale, requiring continuous blood transfusions.

Seeing that the child has been thin and unwell, the parents could only do their best to find out the cause through various tests, but they did not get an answer.

Based on the doctor's suggestion, the parents sent the child's DNA to a German laboratory for testing when Ziqing was under 2 years old, which confirmed that she diagnosed PKD. The causes of the disease might be the parents are carriers or caused by genetic mutations. In appearance, she looks like same as other children, but in fact she needs blood transfusions every month and has accumulated a lot of ferritin in her body.

Once the ferritin index is too high, it is very likely to damage organs, especially the liver. This caused little Ziqing's liver swells by 2 to 3cm every month. With the discovery of the cause, little Ziqing must undergo bone marrow transplantation, and the operation must be performed soonest possible, otherwise the risk will increase day by day.

【Over 90% matching rate, mother donates bone marrow for her daughter】

The parents could not find a suitable bone marrow in local and Singaporean hospitals, and once considered looking for it in Taiwan. Watching the child grow up day by day and suffering the discomfort caused by the blood transfusion every month, the parents see it in their eyes and feel the pain in their hearts. When they speeded up the search for bone marrow, they also sent the blood of both parents and Ziqing to the United States for testing. The test results were surprise everyone because the matching rate of the mother and Ziqing was over 90%, and they were suitable for transplantation.

Yong Siew Yee, mother of Ziqing, said, “Usually the parents are not the donors because the child’s genes are derived from the parents. This is due to stereotype is that the parents’ bone marrow should not be suitable for transplantation, so we didn’t test it before. In fact, we never thought about it, therefore I don’t know actually parents can also donate to their children. Now, I can donate to her by my own, and we are close to 100% matching.

The most happy thing is that the doctor also told them that at Ziqing's current age, it is not too late to undergo a bone marrow transplant. They are very happy to found a treatment plan, but the biggest problem right now is that they have spent a lot of money on testing and basic treatment for many years. With the only income of father, Yong Kai Jie, the couple cannot afford up to RM350,000 for bone marrow transplant surgery.

Yong Kai Jie (37 years old) is a dance teacher who teaches classes. After the MCO, he switched to selling household goods on the online shopping platform. Now the monthly income of two jobs is nearly RM10,000; and the mother Yong Siew Yee (30 years old) is a housewife, and little Ziqing is their only daughter. In addition to medical expenses, they also need to afford for housing loans, car loans, living expenses, education expenses, and extra.

Yong Kai Jie is an enthusiastic donor of the One Hope Charity & Welfare. In the past few years, he often donated to the fundraising campaigns. Due to helpless on the medical fee, he decided to contact the One Hope Charity for assistance.  After knowing little Ziqing's health condition and the difficulties faced by her parents, One Hope Charity conducted home visits and assessments, and finally decided to assist little Ziqing in raising RM350,000 for bone marrow transplant surgery to help her get rid of the nightmare of blood transfusion.

The family agreed to fully authorise One Hope Charity to take charge of the fundraising and collect donations from the well-wishers on their behalf. Contact One Hope Charity’s hotline at 016-419 2192, 019-232 2192.