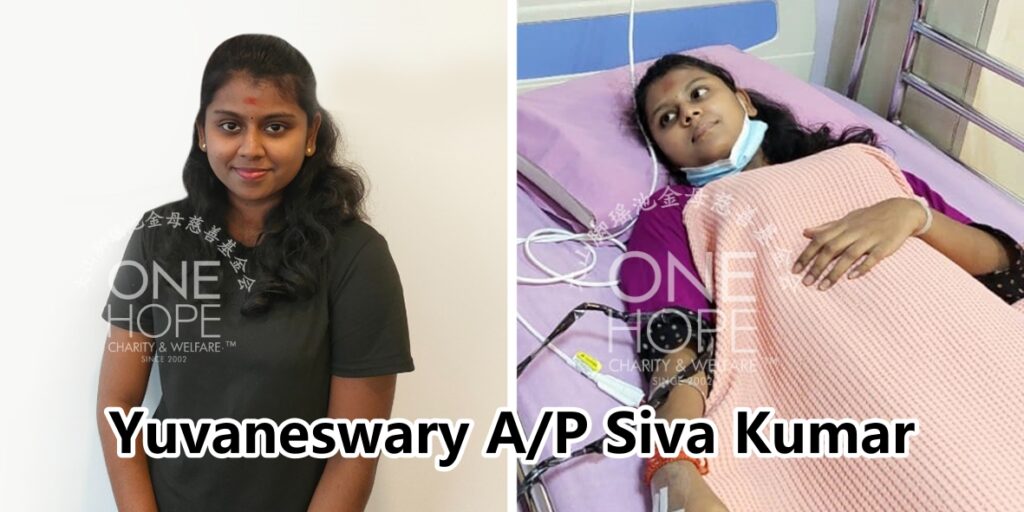 She has been suffering from Crohn’s Disease since nine years ago and relies on medications to control her condition. Over the years, her family had spent all their savings on her treatment. As she grows older, the 18-year-old girl needs to change her medications. Her parents plead for a donation of RM33,840 so that their daughter could continue with her treatment and live the life of a normal person.

Yuvaneswary A/P Siva Kumar, an Indian girl from Kuala Lumpur, had vomiting and diarrhea, as well as abnormal stomach cramps almost every day when she was nine years old. Every time when she felt unwell, her parents brought her to a clinic, but the doctor was unable to identify her problem and just prescribed her with some medications to stop her diarrhea and vomiting.

Until she was 10 years old, a relative recommended her to go for a check in a hospital. After a detailed endoscopic, the doctor confirmed that she was suffering from Crohn’s Disease.

There is no cure for Crohn’s Disease but treatment could help reduce and control the symptoms. Therefore, Yuvaneswary has been relying on medications to control her condtion since young.

It was until 2019 when her condition became severe. The doctor conducted checks on her and found out that her condition had worsen. She suffered not only serious vomiting and diarrhea, but also pyogenic complications. Hence, she needs to start another course of  treatment.

At that time, her father withdrawn his Employees’ Provident Fund (EPF) to pay for her treatment amounting to over RM30,000.

After the medication treatment, her condition improved. Before the treatment, she weighed only 43kg, but her weight has increased to 59kg currently, which is an ideal weight for a normal adult.

However, the price of the medicine is expensive. It sums up to RM33,840 for a two-year course. She has to inject the medicine into her body every two months.

【As she suffered from Crohn’s Disease, she missed many opportunities to join activities in her childhood】

Yuvaneswary said that she had to take long sick leave when she was a child due to her medical condition, which resulted her to miss many enjoyable moments. When her friends were playing, she could only watch them from far. There was also an occasion where she was selected to participate in camping but she had to sacrifice it due to the disease. Everything that she went through made her feel sad.

“When I was young, I would thought that why I got this disease? Why the other children were healthy and did not have this disease? But I got used to it eventually.”

As she could not attend classes, Yuvaneswary always had to study from home. But she did not give up her studies due to her medical condition. Instead, she studied harder. She is 18 years old this year and she is studying her foundation in a local university.

“I hope that I can study courses related to pharmaceutical engineering so that I could help other people who are suffering like me.”

After reviewing the case, One Hope Charity decided to assist Yuvaneswary. Her family also agreed to authorise One Hope Charity to take charge of the fundraising and collect donations from the public on their behalf.