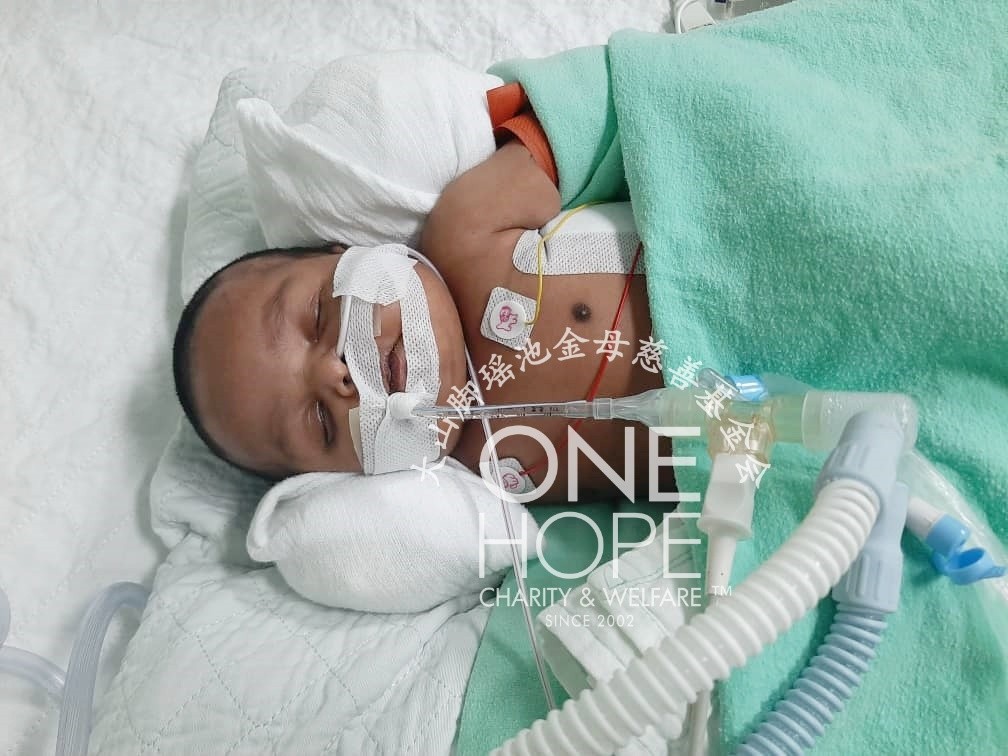 When the mother was bearing a child inside her womb, she noticed that her baby’s heart was not beating properly. The mother was anxious at that time and after the delivery, the doctor confirmed that the baby’s heart had problems and required to stay in the hospital and needed breathing aid. The anxious mother not only needed consultation from her closed ones, but also hoped that the public could donate and save their child as soon as possible.

Up until today, the one-month old baby Zahra Binti Muhammad Saifullah still has to wear a breathing mask. The only time the mother can touch her baby daughter’s face was only when she took off her mask to clean her face.

The baby had taken strong medications to control her illness, but its side effect has affected her kidneys. With the dependency of breathing aid, as well as signs of her lungs shrinking, the baby girl requires urgent emergency surgery to prevent other organs from failing.

【Through her mask, a pair of bright round eyes begged for a second chance in life】

Even with a mask on, her bright round eyes can still be seen. The curious girl would still look around her surroundings, but if she attempts to remove her mask, she would be in grave danger.

When the pregnant mother went for the medical checkup, the doctor noticed that her baby’s heartbeat was not stable, suspecting that the baby has a hole in their heart. But they needed the baby to be delivered in order to confirm the diagnosis and the following treatment.

Hence, the mother has been living in fear and anxiety during her late stage of pregnancy. On the 37th week of pregnancy, she noticed that the movement of the baby has sharply decreased. She was rushed to the hospital to deliver the baby. The baby girl was immediately transferred to the NICU ward after being delivered, putting her on the oxygen mask until today.

The baby girl is now over a month old but still unable to breathe for herself. After examination, she was diagnosed with an atrioventricular septal defect (AVSD). When she was 25 days old, she had undergone surgery to fix her Patent Ductus Arteriosus (PDA) issue, in hopes that she would not need breathing aid and wait till she weighs at least 10kg before her next surgery. Unfortunately after the first surgery, her condition became worse and needed immediate surgery for heart repairs.

The baby girl is still in the NICU ward and during this period, her mother washed her face with her tears every day and requested to breastfeed her. But her baby was unable to breath and unable to be fed with milk. Because the baby was covered in tubes, the mother had never even held her own child.

The baby girl was born in Ayer Itam, Penang. The father Muhammad Saifullah Bin Mahboob, 30, is an executive for a car rental company with a monthly income of RM3,440. The mother Nur Fadhilah Binti Fasir Ahmad, 30, is a housewife. The family are also taking care of their five-year-old daughter and their four-year-old son.