Baharudin, who left about six months of life, felt that he could see the light at the end of the tunnel when he received a call from University of Malaya Medical Centre (PPUM) on October 9. The call was to inform 54-year-old Baharudin – a liver disease patient who was eagerly waiting for liver transplant that an organ donor was willing to bring him a “gift of life”. The “gift” has enabled Baharudin to continue his life, and at the same time allowed a deceased to leave his love in the world.

Baharudin Bin Ayob from Muar, Johor, approached One Hope Charity at the end of last year to seek help in raising RM120,000 for his liver replacement surgery.

The amount was supposed to be raised for the nation’s first nonrelated living-donor liver transplant, where his wife had to donate her liver to save him. However, the Covid-19 pandemic turned severe early this year, which resulted several delays on the liver transplant. During an examination later on, the wife was found out to have fatty liver and was no longer suitable for liver donation. Therefore, Baharudin, who had liver cirrhosis, had to wait for the miracle of getting a new and suitable liver.

Fortunately, after waiting for seven months, Baharudin finally received a call from the hospital on October 9, informing him about the availability of a suitable liver. And now, the liver transplant surgery has been completed at the University of Malaya Medical Centre. The successful surgery has given him another chance to live. The couple expressed their heartfelt gratitude to One Hope Charity for assisting them in raising the RM120,000 surgical fee. At the same time, they are grateful to the donor who leave the love behind after the passing, so that the liver could continue to extend the life of others.

One Hope Charity & Welfare chairman Dato’ Chua Sui Hau pointed out that during the waiting period, volunteers from One Hope Charity had always concerned about the patient’s condition. And now, the surgery has been conducted successfully at the University of Malaya Medical Centre on October 10. The liver recipient is in good condition, and he has been transferred to the normal ward. It is expected that he will be discharged soon. One Hope Charity wishes him a speedy recovery, so that he can continue to serve the society and share the love and hope to others.

【The liver transplantation was successful. The couple would like to thank One Hope Charity for raising the surgical fee, so that they did not have to worry about the huge amount of surgical fee】

His wife Hazilah told One Hope Charity that after receiving the news from the hospital on October 9, the couple was very surprised, and they felt unbelievable. The only thing that they were very assured was that One Hope Charity had managed to solve their problem in getting the surgical fee. Without having to worry about the huge sum of medical fee, the couple drove immediately from Muar, Johor to Kuala Lumpur. After conducting a series of examinations arranged by the hospital, the surgery was carried out on October 10. Baharudin is currently under observation in the hospital.

She is very grateful for the assistance given by all parties – Firstly, the surgical fee which was collected from generous donors of One Hope Charity, which took away their financial burden; as well as the counselling and encouragement from the medical staff of the hospital. Special thanks also to the donor who donated the liver after the passing, so that her husband has a chance to survive with the “gift of love”.

She said that the couple will uphold the spirit of love and caring, and continue to provide help  to those in need. 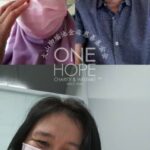