"Timely examination and early treatment are very important. I am glad that I went to the hospital for examination as soon as possible after I found an abnormality. Now I will be strong in receiving treatment and face everything with optimism."

Boon Chew Chin, a 66-year-old single woman, was diagnosed with early stage pancreatic cancer and is now undergoing chemotherapy. She said that not only the treatment should not be delayed, but also the examination. If the examination is delayed, the condition will only get worse, requiring more time-consuming treatment and more pain.

Boon Chew Chin was in early May this year because of a bloated stomach, yellow skin, asthma and brown urine. The test showed that he was suffering from pancreatic cancer in the early stage. Fortunately, it was discovered in time. The doctor suggested that after 6 courses of chemotherapy, the tumor should be shrunk before surgical resection.

The RM30,000 chemotherapy fee she needs has been raised. She is very grateful for the donations from the public, so that she can receive treatment smoothly and recover as soon as possible. 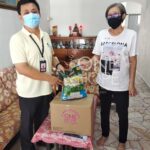 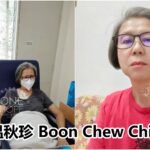