A sister and her youngest brother suffer from hearing loss since young. After having their artificial cochlear implanted for many years, the sound processor of their respective device had damaged, and they had to face hearing problem once again. Recently, One Hope Charity had successfully helped the siblings to raise RM36,000 and they finally got the sound processors replaced. Their mother was touched and grateful to all generous donors who offered help to her children.

Penang born siblings, 21-year-old Chuah Kai Ying and her 14-year-old brother Chua Jia Gang underwent their artificial cochlear implant surgery at the age of 8 and 2 respectively. After their surgery, the siblings started schooling and they never gave up on themselves. In terms of academics, they put in twice as much effort as other children. The sister was accepted by Universiti Sains Malaysia this year, and is pursuing a degree in architecture and planning.

Few months ago, the sound processor of their artificial cochlear, which they have been wearing for many years failed. The siblings were forced to use hearing aid on one side of their ear to continue with their online classes. They are from a single parent family and they knew that it was not easy for their single mother to make a living to support the family. Hence, they did not request their mother to buy them the new sound processors they needed.

How does a mother not knowing the needs of her children? The mother will never forget her children’s eyes full of longing when they looked at the latest type of wireless cochlear processor.

Because of her children, the mother approached One Hope Charity for help. After reviewing the case, One Hope Charity decided to assist the siblings in raising the fee needed to replace the sound processors.

After a month, the cochlear processor imported from overseas finally arrived. The siblings were very excited. The cochlear processor company also helped to link the sister’s cochlea to her computer’s Bluetooth free of charge, so that she could use it when she is back to the university for classes. The audiologist also helped the siblings to adjust the volume of the sound processor according to their respective situation.

Her mother Tan Phaik Meay said that when One Hope Charity launched the fundraising campaign earlier, the siblings were very nervous. They kept paying attention to the progress of the fundraising. When they knew that the amount had been successfully raised, the siblings were very excited and looked forward to the day when they received the cochlear processor. And now, they have gotten the processor and the mother can finally relax her mind.

“Thank you very much to all generous donors. You made us feel the care and love from the society.” 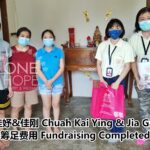 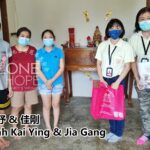 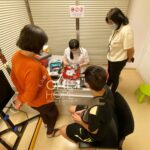