The younger sister suffers from spastic cerebral palsy and she has been taken care of by her elder sister over the years. However, the elder sister became ill since the year before last and she was unable to work anymore. Hence, the elder sister approached One Hope Charity for help.

The younger sister has been suffering from spastic cerebral palsy since she was a child. Her mother died of illness three months after she was born, and her father died of liver disease in 2017. Therefore, she has been taken care of by her elder sister.

She is unable to walk with her feet and she can only drag her body on the floor with her backside. Her elder sister, who is very slim, has to carry her whenever she wanted to go to the toilet. However, the elder sister became ill in 2019. Not only did she become weaker and weaker, she also faced financial burdens.

One Hope Charity decided to assist the sisters and sponsor their food supply for half a year, as well as to provide the younger sister with adult diapers for the same duration. One Hope Charity will also review their needs and provide them with suitable assistance after the six-month duration.

One Hope Charity is grateful to all the generous individuals for your general donations which enable the organisation to provide immediate help to the underprivileged families. 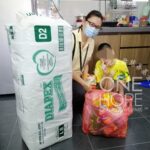