Chia Chi Kuan, a 34-year-old doctoral student suffers from lymphoma. With the generous donations from all the well-wishers, his medical fund amounting to RM204,000 has been raised. Special thanks to everyone who had contributed as your support allows him to continue with his PhD studies while undergoing chemotherapy.

Chi Kuan admitted that RM204,000 is a huge sum and as the current pandemic has affected all walks of life, he really hoped that the medical fund he needed will not add to the burden on others.

Although he is unable to work at the moment, but he planned to rely on the EPF fund he deposited from his earlier employment to support his living expenses during his chemotherapy. He would not give up his data analytic and research, hoping that he could complete his doctorate next year.

Looking back on what had happened in the past, Chi Kuan deeply felt that he was a lucky man. He described cancer as a teacher and a gift that helped him to have a deeper understanding of life, and allowed him to learn on how to make adjustments especially when his was physically and mentally ill .

He said frankly that he did not know what it meant to be strong, but he knew that he should not make his family members sad. Therefore, he must face all the problems, deal with it and overcome it.

Thank you to all the kind souls for your donations, so that he could complete his doctorate while undergoing chemotherapy. We hope that he would recover soon and be able to contribute to the society. 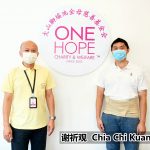 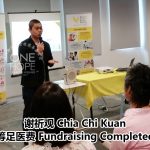