A 27-year-old man of Chinese and Indian parentage, who was the sole breadwinner of his family, died in an accident. His elderly parents were unable to afford his funeral and cremation. One Hope Charity had gathered donations from the well-wishers, so that the family could give him a dignified send-off.

27-year-old Chindian man Beh Jia Chun from Penang Island, went out on a motorcycle to buy supper for his family a few days ago. Unfortunately, he died on the spot after he was hit by a car at a road intersection.

He was single, and he was the sole breadwinner of the family who supported his elderly parents. The sudden bad news left his family members at a loss, as they were worried that they did not have extra money to pay for their son’s funeral.

One Hope Charity made good use of the general donations from the well-wishers. By gathering the donations made by the public, the organisation provided free coffin for the deceased, as well as assisted the family members in the funeral matters, so that he could complete the last journey of life with dignity.

Coincidently, Jia Chun attended the funeral of a beneficiary of the One Hope Charity Funeral and Burial Assistances on the afternoon of the day of the accident. The beneficiary of that case did not have any next-of-kin or family members. As a friend, Jia Chun also acted as the descendent of the deceased and performed a Hindu funeral for that friend.

We would like to thank our generous donors for your kind donations as it will help One Hope Charity to provide more funeral and burial assistances to lonely elders and individuals from poor families. Those who wish to donate can do so anytime as this is a long-term aid provided for the needy. 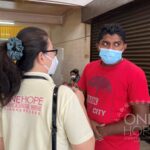