A 84-year-old man, who has been under the care of One Hope Charity since last year, suffered a stroke and died few days after he was admitted to the hospital. One Hope Charity gathered the donations from the public to assist the family in the senior’s funeral and cremation, so that he could complete his life journey with dignity.

One Hope Charity first in contact with senior citizen Chee Yeong Kuan before the implementation of the Movement Control Order (MCO) last year. Yeong Kuan lived with his 37-year-old goddaughter, who is disable. His son worked as an e-hailing driver to make a living. However, it was a heavy burden for the son to support three people with the limited income.

The family’s financial condition turned from bad to worse whenever the country entered into MCO. One Hope Charity has been providing care and dry food supplies to the family from time to time.

In early June this year, his goddaughter suffered a stroke and her movement was affected. The family faced another challenge when the senior citizen suddenly suffered a stroke on September 13. He was sent to the hospital for treatment. After a few days, the doctor allowed him to discharge so that the family could take care of him at home. As he had to be fed through a feeding tube, his son was worried about the huge expenses of milk formula, diapers and other expenses in the future.

After receiving phone call to seek assistance, One Hope Charity stepped in to help the son to source the hospital bed, milk formula, diapers, ripple mattress and other equipment needed, as preparation for the senior citizen to receive a better care at home.

However, when the team from One Hope Charity sent the hospital bed to his home, the senior citizen’s condition deteriorated and died in the hospital after a few days.

Facing the death of his father, the only son could not afford the expenses of his father’s funeral. He approached One Hope Charity for help. As they do not have many relatives, his body was sent for cremation right from the hospital.

One Hope Charity has been providing funeral and burial assistances to poor families. As long as a family is qualified, One Hope Charity would take charge of the funeral expenses so that the family members of the deceased could send off their loved ones without having to worry too much.

One Hope Charity also has a programme called “Last Promise of Life”  where elders without relatives could register with the organisation for their funeral arrangements in the future. One Hope Charity would conduct the funeral based on the applicants’ last wish.

Thanks for the donations from the public as your contributions would help One Hope Charity to provide more funeral assistances to poor families and lonely elders. Those who wish to make a donation could do so anytime as it is a long-term aid provided for the needy.

If there are any poor and needy who could not afford and manage the funeral for their loved ones, or any senior citizens living alone who wanted to register for the “ Last Promise of Life” programme, kindly contact One Hope Charity at 016-4192192, 019-2322192 or 04-5399212 for assistance. 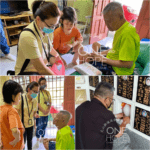