His wife was deaf-mute and he was involved in a car accident. For many years, One Hope Charity had been helping the hapless family. But now, the deaf-mute wife has passed away due to cancer. One Hope Charity has followed her wishes and religious belief during her lifetime to provide funeral and burial assistances to the family.

Chin Kam On from Kedah was amputated after he met in an accident in 2000. Unfortunately, his deaf-mute wife, Khor Chai Ang was diagnosed with colorectal cancer in 2011. The couple finished all their savings on their medical treatment.

After the amputation, he was once become a beggar, but later he felt that it was not right to live by begging for money, so with the help of a friend, he started to sell ice creams in Kulim, Bukit Mertajam and also Selama in Perak.

Although his leg was amputated and his wife suffered from cancer, but he did not give up. The inspirational story of Kam On was reported by the media and it had attracted attention from the public. Therefore, One Hope Charity went for a home visit and decided to sponsor his prosthetic limb, so that he could move around more conveniently.

At the same time, as Kam On’s wife Chai Ang was diagnosed with colorectal cancer, and she had to use an ostomy bag for excretion. One Hope Charity also sponsored her ostomy, as well as several months of living expenses to reduce their financial burden.

A few days ago, Chai Ang passed away due to illness. Before that, Kam On and Chai Ang had registered under the “Promise of the Last Journey” programme by One Hope Charity.

The “Promise of the Last Journey” programme avoid family members of a deceased to feel worried about the arrangement of the funeral, as well as to feel stressful for their inability to pay for the funeral expenses of their loved ones. One Hope Charity would conduct the funeral based on the qualified applicants’ last wishes and religious beliefs.

Thanks to our generous donors for your donations as it will help One Hope Charity to provide more funeral and burial assistances to individuals from poor families and lonely elders. Those who wish to donate can do so anytime as this is a long-term aid provided for the needy. 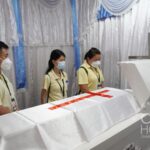