73-year-old bachelor Teh Ah Chai, who was killed during a fire, was an environmentalist from Taman Sri Rambai in Bukit Mertajam. His family entrusted One Hope Charity to take charge of his funeral after he passed away. The charitable organisation gathered the donations from the public to assist the family in the man’s funeral and cremation, so that he could complete his life journey with dignity.

Before his passing, Ah Chai used to live alone along the river in Taman Sri Rambai. With his own skill, he turned his half-brick house into a “paradise”, where he spent his life there.

Unfortunately, a fire broke out at his “paradise” at the midnight of November 17. Ah Chai, who was believed to have slept then, could not escape in time, and he was burned alive. As Ah Chai was a bachelor, his relatives entrusted One Hope Charity to take charge of his funeral and cremation.

One Hope Charity made good use of the Funeral and Burial Assistances donations from the public to assist Ah Chai’s family. The assistance provided were donation of the coffin, prayer rituals, funeral and the cremation; Ah Chai’s ashes will be placed at the columbarium he purchased before his death.

One Hope Charity has always been providing funeral and burial assistances to poor and underprivileged families. As long as a family fulfilled the qualifications, One Hope Charity would take charge of the funeral expenses, so that the family could give their loved one a dignified send-off.

One Hope Charity also has a programme called “Promise of the Last Journey”, where elders without relatives could register with the organisation for their funeral arrangements in the future. One Hope Charity would conduct the funeral based on the applicants’ last wish.

Thanks to our generous donors for your donations and your sponsorship of columbariums as it would help One Hope Charity to provide more funeral and burial assistances to poor families and lonely elders. Those who wish to donate could do so anytime as this is a long-term aid provided for the needy.

If there are any poor or needy who could not afford and manage the funeral for their loved ones, or there are any elderly living alone who are interested in registering for the “Promise of the Last Journey” programme, kindly contact One Hope Charity at 016-419 2192, 019-232 2192 or 04-539 9212 for help. 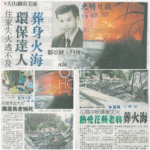